“Beyond traditional defence or commercial programmes, the global aerospace industry is opening up to many other business opportunities, driven by the rapid technological progress that our companies must and are in a position to exploit.”

The industry’s recovery after the pandemic is driven by the growing activity in areas where Andalusia has great potential, such as unmanned aerial vehicles, urban air mobility and New Space, and this is also covered in our region’s Aerospace Strategy. Are foreign markets showing interest in these industries where many Andalusian companies are leading?

There is no doubt that, beyond traditional defence or commercial programmes, the global aerospace industry is opening up to many other business opportunities, driven by the rapid technological progress that our companies must and are in a position to exploit.

On the one hand, we can see that the RPAS market was valued at around $18 billion in 2017 and is forecast to reach $54 billion in 2025, with an annual growth rate of over 14%. On the other hand, the space market is currently estimated at around $350 billion a year.

With great vision, companies in our region started to explore these new “flight routes” some time ago. Thanks to the existence of first-class infrastructure, highly skilled personnel and investment in R&D, Andalusia has become a unique territory for the experimentation and validation of unmanned aircraft technologies and systems, remotely controlled systems and the production, assembly and launch of satellites.

Thus, Andalusia occupies a prominent place in the national landscape in terms of the use of drones in the civil market, and is already the second region in terms of the number of operators, only behind Madrid.

To turn all this potential into a reality, the Andalusian Government will devote significant resources through the Andalusian Aerospace Strategy, which includes programmes for financing companies in future aviation technologies and disruptive and digitalisation technologies, as well as programmes for financing the development of the space industry and RPAS.

All of this will be reinforced by the “Strategy for the Internationalisation of the Andalusian Economy 2021-2027”, approved a few days ago by the Governing Council with 618 million investment to 2027. Given its excellent potential for development, aerospace is one of the industries we will act on as a priority through this new plan, to which specific growth strategies will be directed in the civil, military, defence and space segments, both to promote exports and to use all its appeal to attract high added-value foreign investment.

In 2020, the Andalusian aerospace industry achieved export sales amounting to €1.761 billion, 40% of total Spanish exports. How important has diversification been for maintaining these figures despite the crisis caused by Covid-19?

Diversification is the key to sustaining a business over time and the best formula for facing adversity, whether endogenous or exogenous. This is an axiom in internationalisation and works in all economic sectors. Talking about an industry such as aerospace, which is by its nature global and subject to the vagaries of world trade, diversification is not only recommended, but decisive.

It is true that the Andalusian cluster has strong links with the European market, but it is also true that, in recent years, it has made great efforts to diversify into new markets and manufacturers, for which it has been supported by Extenda. 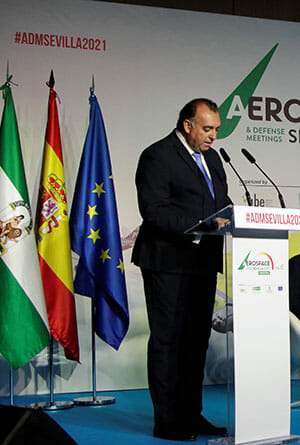 Thus, we can see that today the industry’s exports enjoy strong geographical diversification, with countries from four continents in their top ten markets. Its top four countries in 2020 were European: Germany, France, Belgium and Luxembourg; but the following three were non-European destinations and highly competitive in the industry: the United States, Canada and Brazil; and the ninth was an Asian market, Kazakhstan. In addition, in 2020 countries with a lot of growth potential climbed the industry’s export map, Saudi Arabia, with double the sales; Portugal, with 38% more, and Australia, increasing 15%.

Looking at the foreign trade figures for April, the latest available, we can see that Andalusian aerospace exports are up 13.3% year-on-year to a total of 165 million, thanks to the boost in sales in 14 of its top 15 markets, including destinations in Europe, Asia, the American continent and Oceania.

As I have said, Extenda promotes diversification strategies to strengthen and expand the business of the Andalusian aerospace industry, which is strategic for the Andalusian Government. In 2021, we had a programme that included more than a dozen actions designed to consolidate the Andalusian presence in mature markets and to move forward in new destinations with opportunities, such as the United States, Canada, Morocco, Portugal, Italy, Germany, Belgium and Poland.

The Andalusian aerospace industry has a very strong, consolidated export fabric, which was able to finish 2020 with almost the same number of exporting companies as it had in 2019, before the pandemic. Thus, the industry closed last year with a network of 67 exporting firms, only one less than in 2019. In addition, two in five of them, 29, are regular exporters (four consecutive years exporting), only one less as well, which account for 99.7% of sales, demonstrating the industry’s strong commitment to exports.

The major strengths of the Andalusian supply chain in international markets underpin this powerful network of exporting companies. Strengths such as having a century-old, diverse industrial fabric, which, in addition to final assembly lines, has a set of companies with capacities in the areas of aerodynamics, design and tooling manufacture, as well as other associated activities, such as software development, the importance of which in the aerospace industry does not cease to grow.

We cannot ignore the extensive experience that our companies have in participating in some of the world’s biggest aeronautical programmes and their direct work with the OEM (Airbus) and the three Tier 1s set up in Andalusia; factors that have increased their competitiveness exponentially at the international level.

Furthermore, Andalusia is a pioneer in Spain in developing RPAS applications, which puts it at the forefront of the complete integration of this type of aircraft in airspace, planned by the European Union for 2020-2025.

Alongside this, we have cutting-edge facilities that constitute an industrial, technological and human resources base on which further developments can be built. I am referring to the FADA-CATEC ATLAS Experimental Flight Centre in Jaén, a unique test laboratory in Europe; the servicing centres for commercial and military aircraft at the Seville airport complex; the Pegasus Aero Group helicopter servicing centre in Córdoba and the Seville Air Force servicing base.

And, without a doubt, we have the most important thing, human resources, with a skilled and extremely competitive labour market at all levels, with a high level of training and extensive accumulated experience.

The reactivation of the industry will require public-private partnerships. A recent example is the partnership agreement signed between Extenda and the Andalucía Aerospace cluster, whereby the entity that manages it will promote information services, training, consultancy programmes and commercial actions available on international markets. What actions will Extenda promote to continue to boost our industry in foreign markets?

ADM Seville is a clear example of a successful public-private partnership in the aerospace industry, a model that the Andalusian Government is committed to because of the knock-on effect created by synergies.

In this regard, we have signed a partnership agreement with the Andalucía Aerospace cluster, which we believe will be very fruitful and will optimise and coordinate all our resources with the same objective; to drive the international promotion of an industry in which Andalusia is Spain’s second biggest exporting region.

For us, it is essential to have the cooperation of the industry’s leading company in Andalusia, whose partnership has been decisive in the success of ADM. Clearly knowing the needs of the companies, we will be prepared to offer them the resources and tools to conquer the national leadership and continue to grow in the world.

For our part, we provide the 72 Andalucía Aerospace companies, responsible for 70% of the industry’s turnover, with our information services, training, consultancy and commercial actions in markets worldwide, including the 62 we cover through our Export Network.

This year, in addition to ADM Seville, we are planning to hold a dozen promotional actions to advance in the industry’s key markets, including support for Andalusian participation at the trade fairs in Seattle, Munich, Montreal and Casablanca; trade missions to the United States, Portugal and Poland; business meetings, such as the meeting held with the Italian industry.

Finally, we should mention that we are working with the cluster to define the actions to be carried out in 2022, which may include actions in markets such as Italy, Canada, France and Germany.

The 5th Aerospace & Defense Meetings-ADM Seville 2021 was held semi face-to-face. How has the aerospace industry responded to an event that is well established and a showcase for Andalusian industry?

The aerospace industry welcomed the fifth ADM Seville 2021 with open arms. In such a difficult year, it brought together more than 500 professionals from 264 companies and 20 countries. In this way, ADM Seville has strengthened its international scope and its status as a leading aerospace event in Spain and Europe.

This year, a major effort was also made to organise the event semi face-to-face, with the idea of getting the industry’s business events back to normal. And the response has been excellent. The face-to-face conferences were attended by a large number of attendees and more than 3,500 online business meetings were held.

Everything has been brought together at this event for it to be like this: the Andalusian Government’s commitment to support a strategic sector at a key moment; the sponsorship of Airbus, the largest European manufacturer, and three of the Tier1s in Spain, Alestis, Aernnova and Aciturri; as well as the North American firm Ansys and the participation of 30 major global contractors. A strong commitment to this crucial event and our region as a global hub for the aerospace business, which shows that the industry’s recovery starts in Andalusia.

This is a fact that we will note at the next ADM Seville, which is already scheduled for June 2022 and will resume the usual format. I am convinced that next year we will find an industry in marked recovery, strong and dynamic, and that ADM will serve as a definitive lever for the Spanish and Andalusian industry to fly.