During an airport’s certification or verification process, which takes place within the framework of the Operational Safety Management System (SMS), it may be necessary to carry out an Aeronautical Safety Study (ASS).

Aeronautical safety studies are long processes that require a thorough analysis of the airport environment, involving many different experts and users. Nothing is left to chance to ensure the highest level of operational safety and security.

The SMS is included in the risk management module, which includes all actions carried out by the airport regarding operational safety, and has the aim of correcting any deviations detected during the prior certification process included in the DAAD and in the airport’s Corrective Action Plan (CAP).

But what does an ASS consist of?

As with any other study, the objective of the study must be clearly defined, whether it is to analyse a deviation, study the impact of works addressing a non-compliance, change a procedure, etc.

It should also include the location of the airport where the study is conducted, so that the reader can easily identify the background conditions: main characteristics, schedule, type of operations, or any other peculiarity.

The applicable regulations and the study itself are presented from the point of view of operational safety. For example, in the case of an ASS involving a jet engine, all entry and exit manoeuvres to each stand would be presented, as well as all the affected turns, in such a way that it could be visually observed how much the jet of an aircraft would affect other stands, roads or equipment waiting areas nearby. Another example could be the risk management of a construction site, with a DAAD addressing the distance between the signs and the taxiways, defining the phases of the construction site, the taxiways that might be closed during the works and the new operation.

This is the point when risk management begins, which involves the following concepts:

Starting hypothesis: these are assumptions made at the beginning of the study that may have an impact on its final outcome.

Factors: these are real characteristics detected in the airport’s environment that can act either positively or negatively in the risk analysis, and which usually refer to the configuration of airfields, the type and intensity of traffic, the weather conditions and the CNS/ATM scenario.

Defences: these are measures implemented in the airport at the beginning of the safety study that reduce risks. An example for the case of the jet engine analysis would be the airport having deflective barriers.

Hazards: derived from the failure to comply with a regulatory provision.

Risks: derived from the detected hazards. Risks can be partial or final.

The risks detected will depend on two variables – their severity and their probability – and they can be classified according to either.

As regards severity, the following matrix is used as an indicator:

In terms of probability, the incidents recorded over prior years are examined and compared to the list of hazards detected. If there are no related incidents at the airport where the study is being carried out, data from a complete network or from a country will be used, or even data from a supranational network (Europe, North America, Asia-Pacific, etc.). It is then entered into the following matrix: 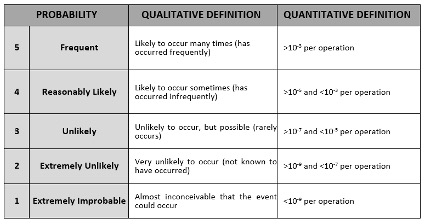 Once the severity and probability are calculated, the risk assessment is carried out using the following matrix:

Regardless of whether the risk is high, medium or low, mitigating measures will be defined and should be implemented so that the risk can be as low as possible.

If the risk is high, it will not be possible to operate under certain conditions, or the work will not begin until the necessary mitigating measures to lower the risk to medium or low have been put in place; in that case, these measures will become defences.

Mitigating measures can be of various kinds, but all have the primary objective of minimising risk as much as is reasonable. They can range from NOTAM notices to painting work, training, etc.

Prior to completing the ASS, the study should be presented to a panel of experts, which will be attended by the developers of the ASS, pilots operating at the airport, air navigation personnel and others involved, so that they can validate or modify the entire risk assessment.

The ASS shall then be amended based on the minutes drawn up during the meeting of experts, which shall be included in the ASS together with the agreement of all attendees.

As can be seen, it is a long process that requires a thorough analysis of the situation and the involvement of various experts and users. This way, nothing is left to chance and the highest level of operational safety and security can be ensured.