The development of Unmanned Aircraft Systems, UAS has speeded up notably in recent years, which has affected all segments of this new industry. As a matter of fact, significant growth is forecast, ranging from UAS for leisure use to UAS for surveillance or national defence purposes.

We will shortly have hundreds of unmanned aircraft systems flying above our cities. It is therefore necessary to design air traffic control systems properly to ensure they fly normally and safely.

In these years, the market has made significant efforts to develop more efficient, better performing aircraft. This has gone hand in hand with a diversification and specialisation of models depending on the purposes they are meant to serve. For instance, a drone equipped with rotors meant for filming has nothing whatsoever to do with a fixed-wing drone designed to observe large geographic areas.

The navigation of these devices has not posed a serious problem to date given the fact that this is a sector which has only just recently begun to boom. The legislation enacted in most countries has focused on the skills of the people operating the devices, while at the same time regulating some aspects of the necessary requirements for flying over some areas or the restrictions affecting other areas (airports, military areas, protected areas, official buildings, etc.).

The problem we will surely face in a few years’ time will be the inexorable trend in the massive use of UAS for distribution, courier services and even transporting people. Moreover, these uses will be performed in both rural and urban areas. It will therefore be necessary to go much further than just developing a legislative framework. It will be necessary to define, create and implement complex air navigation systems for UAS.

The difficulties this entails are many, since it will be necessary to harmonise technical navigability, environmental, administrative and geopolitical criteria.

Among the technical navigability criteria, special mention should be made of the criteria having to do with the structure of the airspace within which UAS fly. To start off with, we are dealing here with three vectors of movement. Having dozens (or hundreds) of aircraft flying in the three dimensions of space requires a precise definition of the ways this can evolve. Likewise, technical advances should allow for much more accurate aircraft positioning. According to current developments, everything seems to suggest that traffic airways and route interchange nodes will have to be configured. This would be somewhat akin to today’s airways for commercial aircraft, but with a higher concentration of airways and greater constraints on safety distances. One of the critical points which has already been identified is the development of suitable protocols for the automated transfer of control over aircraft between different control nodes.

Regarding this point, it will also be necessary to contemplate the coexistence of current air traffic with emerging UAS traffic. 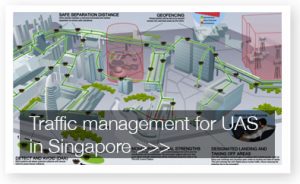 If we look into the criteria related with the environment, it is essential to consider the environmental impact of UAS in both urban and rural areas. Without going into technical details, let’s take the noise impact generated by any UAS as an example. What level of noise would be generated by just a dozen drones flying along our street? And what about a cattle farm? More silent aircraft would obviously be necessary. At the same time, navigability criteria should expressly limit the height and distance constraints in each specific case.

As for the administrative criteria, it will be necessary to clearly define which agency will hold sufficient competencies to set out the details of air navigation in each specific environment. Since UAS will mainly fly in cities, it does not seem logical to envisage a single agency in charge of regulating all kinds of navigation. Instead, due to questions of logic and scale, the regional or local administrations are more likely to be in charge of tackling the specifics of airway design in each case. As is obvious, all this has to follow some aeronautical criteria which are compatible with commercial flights and according to parameters that have been reached by consensus across regions.

Lastly, it will also be necessary to take into account geopolitical criteria to adapt national legislations to each specific case and to the constraints which each state imposes on this kind of aircraft and traffic.

Some countries and organisations are already developing solutions in an effort to keep one step ahead of what controlling the autonomous navigation of UAS will entail. 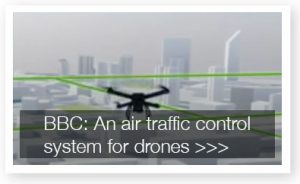 NASA is one of the organisations which has taken the lead on this issue. It is adapting already known air navigation concepts to the specific case of UAS. The proposal is known as UTM (Unmanned Aircraft System Traffic Management) and includes concepts for the design of airspace, airways, nodes, weather controls, etc.

One of the essential premises being considered is the fact that UAS will fly in an automated fashion. Hence, it also makes sense that their air traffic control should also be automated.

The UTM environment will also require the registration of any aircraft that enters the system, as well as the identification of the ones that are not inside it. This will be an essential element to ensure safety when UAS are used and their relationship with the environment and the population.

Other entities like Vodafone or Nokia have also detected a business niche and are attempting to reach agreements to adapt their networks to monitor and control UAS.

Administrative bodies like the Government of Singapore and SESAR (Single European Sky ATM Research) have been working for months on seeking or developing real UAS navigation control solutions within their specific areas of competence. For their part, technology corporations like Simulyze or General Atomics have also been working for years on tools to control the navigation of unmanned aircraft.

What cannot be placed into doubt, however, it that UAS are already boosting the development of several economic activities while these attempts at normalizing air navigation arise. These activities should not be affected by a delay in the development of navigation systems (and legislation) that would allow these aircraft to fly efficiently and safely through the air.