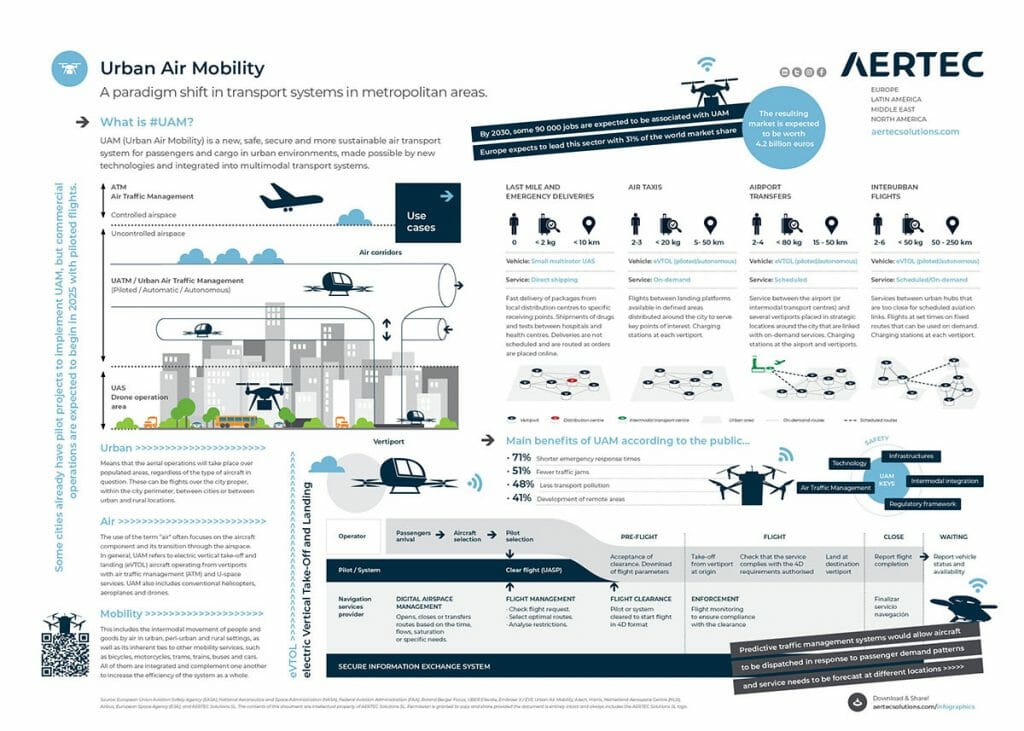 The term “Urban Air Mobility” (known as UAM) is used to refer to the new potential that air vehicles can bring to urban mobility.

It is a new, safe, efficient, secure and more sustainable air transport system for passengers and cargo in urban environments. Aerial operations will take place over populated areas, regardless of the type of aircraft in question. It will promote intermodality, which will not be limited to urban settings, but will also include the perimeter of cities and rural environments.

One of the fundamental aspects of UAM is to promote the efficient integration of these operations with other means of transport already in service. Thus, from a regulatory standpoint, the necessary foundations are being laid to coordinate and integrate UAM with controlled air traffic.

Even though the technology is already mature enough to launch pilot projects in various cities around the world, the public are still hesitant, according to a survey conducted by EASA, the European Aviation Safety Agency (see study). Some of the aspects mentioned include:

Automatic or autonomous flights: The public distrust technologies they do not understand, and therefore vehicles that are not piloted by people. In this regard, autonomous flights have already been shown to be safe.

Privacy: Some groups are concerned about privacy due to the widespread adoption of UAM. There may be misconceptions as to how cameras are used and the applicable laws. The regulations satisfactorily address this aspect.

Work: There are concerns that autonomous technology will make certain jobs in various sectors obsolete, but it is also the case that UAM will create many new jobs that never existed before.

Environment: Audio and visual nuisances in residential neighbourhoods are likely to generate some degree of localised rejection of aircraft operations.

What is certain is that the public likewise receive a series of benefits with the implementation of UAM. Those mentioned include shorter emergency response times, fewer traffic jams, less pollution from transport and the real possibility of developing remote areas.

Some cities already have pilot projects to implement UAM, but commercial operations are expected to begin in 2025 with piloted flights. However, the term is still being defined in aviation regulations, as are many of its characteristics. Once all of this is resolved, which will be very soon, urban air mobility will have become a reality.

This infographic shows some of the features that define UAM, its potentials and opportunities, because it will soon create an environment in which we will all have to live together.