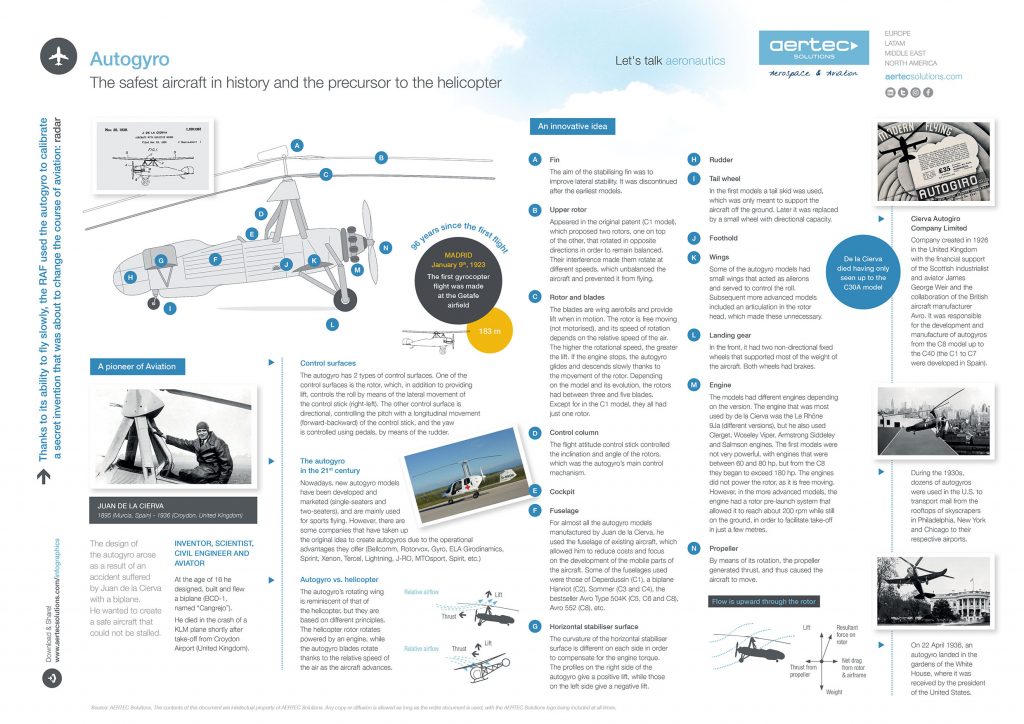 At the beginning of the 20th century, there were still many things yet to be developed in the world of aeronautics. In fact, almost everything was still to come. In that context, aeronautical pioneers developed and tested different types of aircraft in an attempt to achieve aircraft that would fly higher, farther and safer.

It was safety that was key in the conception and development of an aircraft that was called the autogyro. Its inventor was Juan de la Cierva, an inventor, aeronautical scientist, civil engineer and aviator, born in Murcia (Spain) in 1895. His whole life revolved around the world of aviation, and he managed to design and build his first aircraft when he was just 16 years old.

It was an accident with a fixed wing aircraft that led him to conceive a new rotating wing aircraft, in which safety prevailed over every other parameter. According to his idea, this aircraft could not stall because its rotating wing, which moved freely when air passed from the bottom up, was its main source of lift. The faster it descended, the faster the rotor blades would rotate, storing energy and providing more lift.

Successive autogyro models began to be developed in 1920, and the greatest success came with the C30 model, with many units being sold to several different countries. It became a popular aircraft in the postal services and air forces of some countries.

Juan de la Cierva died in 1936 in a commercial aeroplane accident at Croydon Airport (United Kingdom) without ever seeing how several dozen of the autogyro’s patents were fundamental for the subsequent conception of the helicopter.

This infographic shows the main characteristics of the autogyro, its capabilities and some curious facts that demonstrate the importance of this invention in the development of aeronautics.