Aviation is one of the most global industries that exists, and it has become a major influence on the world economy. It has the capacity to connect people and companies across all continents, and it is perhaps the greatest exponent of globalisation. It has maintained a steady growth over the past fifteen years, although it is currently suffering severely from the setback triggered by the coronavirus pandemic. However, it has already survived other crises and has shown long-term resilience. This has made it an indispensable means of transport, with significant influence on the socio-economic development of geographic regions.

Air transport is at the epicentre of many socio-economic benefits arising from the development of different geographic regions. Without aviation, it would be virtually impossible to imagine a society that enjoyed all the comforts we currently benefit from.

Aviation generates economic growth, creates jobs, and facilitates international trade and tourism. In 2018, it contributed almost 2.5 trillion euros to the world’s GDP and generated more than 65 million jobs. In addition, aviation has a vital impact on other jobs and economic activities that flourish in the presence of business or industry, made possible by air travel due to the intrinsic value provided by speed and connectivity, or because of the associated generation of tourism and domestic trade.

The direct and indirect effects of air travel-related activities are easily identified and quantifiable. However, there are other types of effects (called induced and catalytic effects) that require specific analysis in order to be adequately quantified. Although their value may vary according to the methodology used, the most important thing is that they objectively show the hugely significant impact aviation has on the economy in areas that surround airports.

One of the sectors that is most dependent on aviation is, as previously mentioned, tourism. In 2019, approximately 1.5 billion tourists crossed national borders, and more than half of them travelled to their destinations by air. That year, aviation supported more than 40 million jobs within the tourism sector, and through this contributed approximately 800 billion euros to the world’s GDP.

Aviation’s importance for tourism has been demonstrated very clearly during the COVID-19 pandemic, when global air travel came to a standstill, effectively halting all tourism activities except those of a strictly local nature.

Air transport is also a driver of global trade and e-commerce, as it has enabled the globalisation of production. Last year just over 58 million tonnes of goods were transported by air. Moreover, small volumes of air cargo are equivalent to large values in world trade: while in terms of transported weight, aviation accounts for no more than 0.5% of the total, this represents 35% of world trade in terms of value. The advantage of aviation over other modes of transport as regards speed and reliability has also contributed to the market for express delivery services (closely linked to e-commerce) and the expedited transport of goods. Currently, about 86% of e-commerce deliveries are transported by air at some stage.

Nobody can doubt that the aviation industry is a generator of wealth and ever-increasing comfort. It is not only to do with the economic earnings arising from the tickets sold to the millions of passengers who flew last year, but also the services offered to those millions of passengers at any airport (food, shopping, car rental, security, etc.). The impact of aviation also includes the salaries of the more than 20 million people who work directly at airports or in the aviation industry, the cargo transported between remote corners of the planet, and travel agencies, to give just a few specific examples. In this infographic, we outline the economic impact of aviation and the knock-on effects it has in its areas of influence. 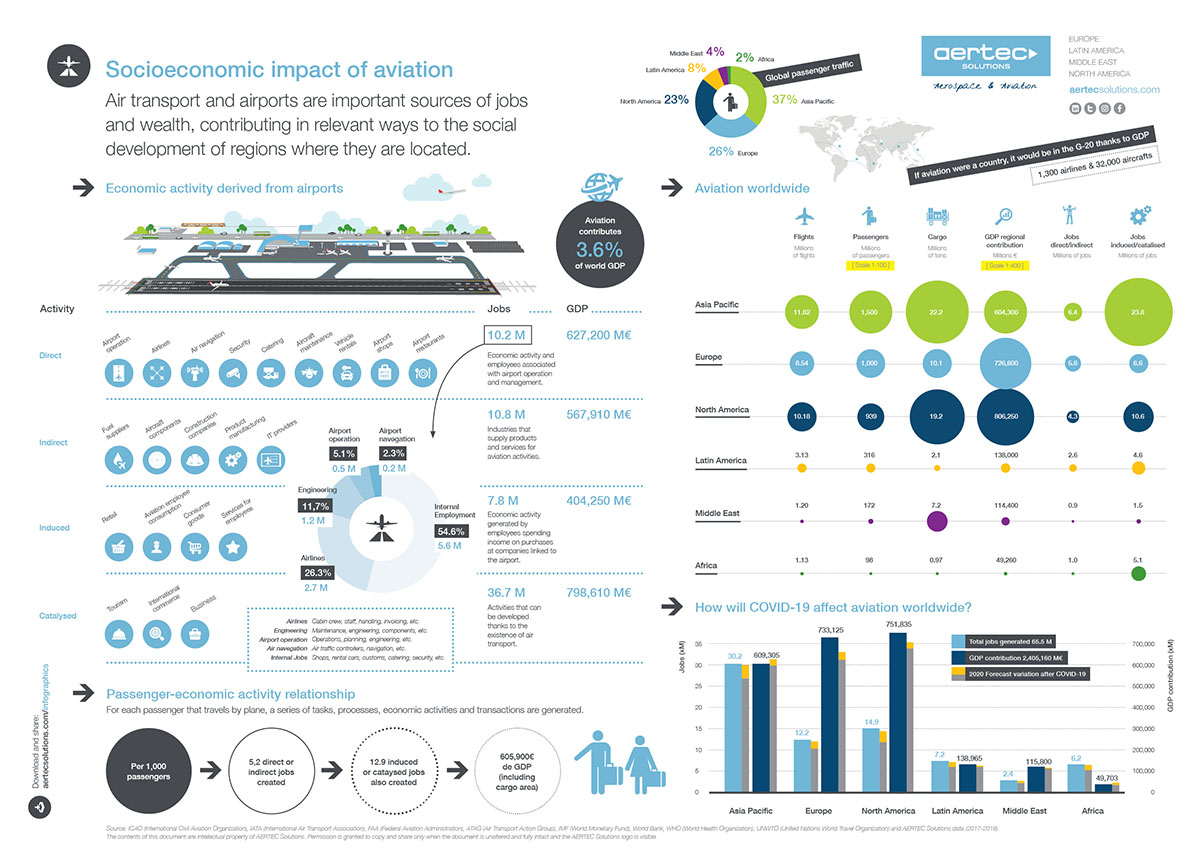