Imagine that the minute you arrive at the airport, you are welcomed by a talking anthropomorphic machine which offers to lighten your load and carry your luggage. The machine then proceeds to read the QR code of your ticket or boarding pass, and politely bids you farewell, but not before asking whether it can be of further help. You don’t see the machine again but without even realising it, it has headed off to the corresponding ticket counter and checked in your luggage safely so that all you have to worry about is picking it up at your destination.

Airports around the world are a perfect testing ground for evaluating the interactions between robots and people. The services and possibilities they offer are numerous.

This is but a brief example of what some robots already do at airports around the world.

These devices can be put to many uses; as many as our imagination permits. However, in many aspects, the technology is already advanced enough to be able to assign robots with tasks of varying levels of complexity. 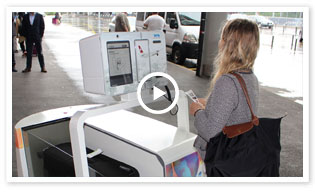 Amongst which are, autonomous movement, localisation, barcode-reading, facial identification, voice recognition and speech synthesis, tactile sensibility, anticipation of obstacles, automatic calculation of routes and alternatives, etc. There are many technologies that have been developed independently for different sectors, but when combined together in this sector they grant robots the relevant capabilities to provide an innovative, and at the same time efficient, service in airports.

But what is so special about airports? Many of these machines are originally tested in the research centres where they are being developed. But the best testing ground is an environment where these machines have to carry out complex tasks with multiple variables and interaction with people. Airports provide the perfect places for the practical testing of cognitive systems. It is not only about the initial contact with the interested party, but also about the sum of all the variables that may present themselves such as, people crossing in front of the machine, queues of waiting passengers, information booths, lost luggage, sudden changes to boarding gates, emergency situations, etc.

Nevertheless, interaction with people is quite possibly the trickiest task due to the obvious fact that people just don’t trust autonomous machines; and it is for this precise reason that most robots are anthropomorphic; in order to minimise the initial rejection as best as possible.

If we look at some specific cases of success, there are almost one hundred airports that already use autonomous machines, anthropomorphic or otherwise, which provide various types of services to people.

Spencer, for example, is an anthropomorphic robot (although without arms) that attends to the needs of passengers at Schiphol airport (Amsterdam) where he helps them make their flights on time. Leo, for its part, is a robot that carries suitcases at the airport in Geneva, although granted, in this particular case the machine is not very anthropomorphic. For many weeks, ASIMO has been guiding passengers at Narita airport (Tokyo), the same place where a robot called NAO informs passengers about exchange rates around the world and manages their currencies. On the other hand, in Beijing we may run into Anbot, a robot designed to carry out surveillance and security tasks. 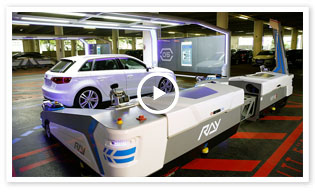 There are other ingenious robots that despite their lack of human appearance have been added to the range of services on offer at airports: Ray, for example, is a robot which parks cars at Düsseldorf airport. Or, there are the Cyberdyne robots at the Haneda airport (Tokyo) which move heavy merchandise, albeit something slightly removed from their original concept.

The truth is that the next time you are wished good morning at the airport, you shouldn’t be so surprised when you turn around to see a strange looking machine in front of you. But don’t worry; just smile and return the greeting. After all, making it to your flight on time, or not having to carry your luggage, just may depend on it.