If we go over the history of aviation, we will become aware that aircraft have always responded to two basic types: aerostats and aerodynes. The former are aircraft which weigh less than air, while the latter are kept aloft thanks to the fact that they are able to generate lift through their own means.

Some unconventional entrepreneurs want to go much further by questioning, if necessary, the main conceptual principle of the aircraft that should be used.

There was a time when it seemed that large-scale commercial aviation would be ruled by aerostats. The very first large aerial vehicles were airships, the most famous of which were the Zeppelins. They came to measure 245 metres in length, more than three times the length of an Airbus 380. They could carry more than 70 passengers and around 20 crew members at more than 130 km/h, which was a significant milestone in the first three decades of the 20th century. Nonetheless, the development of these aircraft was halted mainly as a consequence of the Hindenberg accident in 1937.

From that moment on, fixed-wing aircraft would evolve and adapt to take the leading role in commercial flights. The invariable trend has been to build ever larger, more rapid, safer and more efficient aircraft, but based on the same principle of lift. 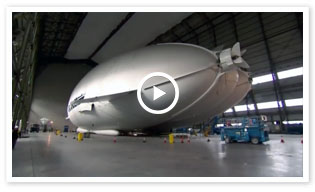 Efficiency in aircraft construction has acquired new impetus since the start of this century. The aeronautical industry takes great care to design new lighter aircraft thanks to the new materials used in construction and more ecological engines, and governments are moving forward in the same direction.

In Europe, for example, the Advisory Council for Aeronautics Research (ACARE) was set up in 2001, in which more than 50 public organisations and companies take part. Its mission is not only to foster greater competitiveness in the continent’s aeronautical industry, but also to encourage better sustainability in air transport. Regardless of the projects and initiatives that are being started up (Clean Sky, SESAR, etc.), the most important thing is that there is a global awareness over and above airline profitability that is leading toward a more sustainable scenario.

However, some unconventional entrepreneurs want to go much further by questioning, if necessary, the main conceptual principle of the aircraft that should be used. This is precisely the case of what could shortly become the world’s largest aircraft: Airlander, a reinvention of the airships of the beginning of the 20th century, but using current technology. 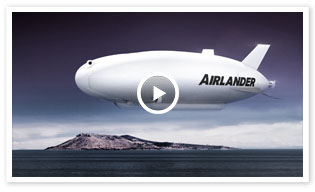 The first developments were made by the United States Navy, which, however, rejected the project in the face of budget restrictions and sold it to a group of individuals, who are currently preparing its maiden flight.

Its main missions will be to transport air cargo and provide assistance in areas which are difficult to access with conventional aircraft. The Airlander measures a little over 90 metres and will fly at speeds of around 150 km/h at a height of almost 5,000 metres. It will be able to land and take off almost vertically.

If the plans come to fruition, we will see it fly this year. The concept is not new, but it is certainly different from what we are currently used to seeing in our skies. We welcome it.