The “passenger terminal” typology has reached its 100th anniversary. From the beginning, when airports consisted only of a light hangar and an omnidirectional airfield to today’s “airport cities”, this infrastructure has undergone exponential development. The facilities that support the increasingly complex aviation industry are becoming larger in scale, more efficient and, of course, safer.

Washington Dulles and London Stansted airports are considered role models when it comes to sustainable architecture.

But why are airports the way they are? What is the reason why, on many occasions, we feel airport terminals are similar to each other? In my opinion, one of the main reasons is that airport operators are not very fond of experimenting with their resources. Setting up an infrastructure as complex as an airport requires enormous efforts in technical, logistical, management and, of course, economic terms. Thus, if experience shows that an organizational or functional scheme works well, why change it?

Throughout these 100 years of evolution there have been disastrous experiences, changes motivated by the evolution of air transport, singularities applauded at the time of inauguration, but that ultimately have failed to stand the test of time and, of course, masterpieces that have become icons replicated endlessly throughout the globe, sometimes literally and with misfortune, others, with designers succeeding in capturing the essence they transmitted and adapting them to a particular situation.

Two airport terminals belong to this group that can be considered iconic: Washington Dulles airport terminal, designed by Finnish architect Eero Saarinen, and Stansted airport, the work of Sir Norman Foster. The success of these two buildings – in addition to turning them into models that we can look to learn how to design more efficient airports – makes them sustainable in an “essential” way, since both buildings have been operating flawlessly since they were put into service several decades ago.

One of the main challenges that current air terminals must face is the fact that they tend to become obsolete even before they are completed or before any expansion occurs. In the middle of the last century, this circumstance was fueled by the unstoppable growth of air traffic and the technology on which it was based. Each decade produced a technological leap that caused an immediate evolution in transportation: increasingly larger, faster and more comfortable airplanes. These aircraft demanded, in turn, larger and more efficient infrastructures. 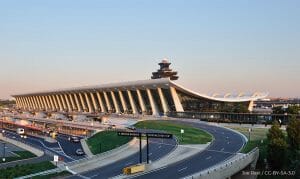 On the other hand, advances in the field of aeronautics meant increasingly distant international and intercontinental flights. Hence the need to incorporate border and baggage controls in the terminals. As commercial aviation became more crowded, airports had to be provided with more comfortable and spacious areas to accommodate travelling passengers. Let’s not forget that, at the beginning of this great adventure, flying was terrible in terms of comfort. Well, Washington Dulles pioneered both: innovative solutions and a “scalable” organizational scheme.

At the end of the 1950s (more than 60 years ago!), Finnish architect Eero Saarinen was hired together with Ammann & Whitney engineering to develop the passenger terminal of what is now the fifth United Airlines operations hub and one of the busiest airports in the country, with more than 125 destinations.

In addition to its design, which combines simplicity and a spectacular nature, this project deserves to be studied due to the architect’s desire to provide innovative solutions – which are still working today – to a terminal’s fundamental problem: the flow of passengers. Since its inauguration in 1962, the main terminal building has remained practically intact, accommodating successive extensions that have doubled the length of the original structure.

One of the key aspects in the innovation of this terminal was the use of transport vehicles, known as mobile lounges. These “vehicles”, similar to some kind of giant luxury bus, transported up to ninety people from the terminal to their airplane. The use of these mobile concourses was a revolutionary approach to airport traffic, allowing Dulles’ design to dispense with the multitude of gates that cluttered most earlier terminals.

In addition to this, and as a result of a detailed study of several nearby airports, the aircraft parking area was optimized, as well as the mobility of the airport staff itself.

The image of the building succeeds to become iconic in a simple way, with an aesthetic based on the aeronautical world which, at that time, represented a clear break with the rigidity of the modern movement.

As a curious fact, the Dulles terminal has appeared in many films set in Washington, including Seven days in May, Die Hard 2, Airport, Forces of nature or The X Files, among others.

Stansted airport just outside London is the second example that marks an important turning point in the design of passenger processing buildings. This terminal, with its careful architectural design, solves in an integrated manner the most important aspects of a building of this type, including its layout in the surrounding environment, functional program, technological possibilities, future interior transformations, etc. 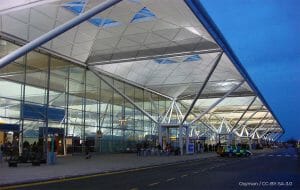 Foster’s virtue was to achieve all of the above through an extremely simple approach. He suddenly bypassed almost half a century of airport design, returning to a seemingly simple container that housed everything needed to carry out all the processes. A container protected by a cover made up of twenty-two lowered domes under which both the airside and the landside of the terminal were jointly organized.

The entire program takes place on a single floor to which the passenger enters from the drop-off area, accessing the check-in area, passport control and the boarding lounges. Passengers are aware at all times of their situation with respect to their final destination: the aircraft parking platform, which is visible at all times.

Unlike most contemporary airports, there is no chance of disorientation. For the first time, there is a real intention to place the passenger at the center of the design focus, giving them absolute freedom of movement and full clarity of vision.

Innovation equally resides in two simple interconnected decisions: making the most of the scant possibilities of natural light in the northern London countryside and freeing up the traditionally level of saturation of the false ceiling, creating a lower level through which the pipes of the installations circulate. The SATE is located in that basement and an area is made available for housing a railway station. Both resources are common today but at the time, they turned out to be very innovative, and successful, given the paradigm they have become. In addition, the changing but constant light is what gives a poetic dimension to the building, while providing more than significant advantages in terms of efficiency and, therefore, economics: maintenance costs, according to the designers and operators of the building, turn out to be about half of any other British terminal.

For all these reasons, Stansted can be considered a pioneering airport in its position at the forefront of sustainable, energy-efficient architecture. While Foster’s studio was designing this building, the concept of sustainable development was enunciated for the first time in the European Parliament.

Let us also think of the fact that, in the same year that this terminal was put into service (1991) and in subsequent years, many others were inaugurated around the world whose approach, from a programmatic, sustainable or design point of view, were the polar opposite to those developed for this project. What option should we be left with to be truly consistent with the world we want?