Masterplan for the Rionegro Airport in Medellín (Colombia)

AERTEC Solutions is continuing with its international growth in Latin America. The engineering and consultancy multinational specialising in airports, the aeronautical industry and defence has been awarded a project to develop the masterplan for the José María Córdova International Airport in Rionegro located on the outskirts of Medellin in the region of Antioquía, Colombia.

The José María Córdova Airport in Rionegro is currently Colombia’s second most important airport with regard to passenger movements and cargo.

AERTEC Solutions will work jointly with the Colombian firm UG21 and the British engineering firm Mott MacDonald on the project. It consists of developing a masterplan, which will include an analysis of the current airport to detect its facilities’ modernisation needs for the next 20 years, along with an air traffic forecast (passengers and cargo) for said period and the appropriate guidelines to cover future demand with a top-quality service meeting international criteria and standards.

The plan also includes a technical, operational and financial feasibility study on the construction of a second runway at the Colombian airport in the face of growth forecasts for the coming decade. The project’s contract amounts to over €1 million and will be carried out in a time scale of eight months.

The initiative forms part of an investment plan aimed at improving and enlarging airport infrastructures put into place by the Colombian government through AEROCIVIL, the air authority which awarded the contract. 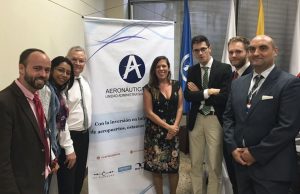 By means of this new contract, the aeronautical engineering and consultancy multinational has strengthened its international presence and foreign expansion in Latin America, where it has conducted several projects in recent years, especially in Colombia. More specifically, the company has already carried out other significant initiatives in the South American country, including the design to improve the airfield at Cali Airport for its international certification, buy side technical advisory for Barranquilla, Armenia, Neiva, Popayán and Cartago airports and management of the concession tenders, the design of the Centro Norte Masterplans, which include Montería, Quibdó, Carepa and Corozal airports, and taking part in a project connected with remotely piloted aircraft (RPA).

The contract also consolidates AERTEC Solutions’ role as a company having expertise in consultancy and auditing services for the airport industry and the international weight of its business portfolio, which accounts for more than 80% of its total turnover in the airport area.

“The José María Córdova Airport in Rionegro is currently Colombia’s second most important airport with regard to passenger movements and cargo (after Bogota Airport) with almost 7 million passengers a year, which is forecast to reach 10 million passengers in the medium term”, affirmed Carlos Berenguer, Aviation Director at AERTEC Solutions.

“It is one of the country’s main infrastructures and the need to design a roadmap to refurbish, enlarge and modernise its facilities and services in the face of the growing demanded expected in the coming years derives from this fact. It is an important project and we are grateful for the trust placed in AERTEC Solutions to carry it out”, he added.