The most prestigious US airlines contributed the airport’s leadership by making it their centre of operations. The eight terminals built since 1958 were operated by those airlines: TWA, Pan Am, National, Eastern, JetBlue, American Airlines, Delta… 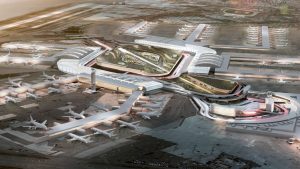 Some of its passenger terminals have even set trends in architectural and functional design. This is especially true for the Worldport (Pan Am) and Flight Center (TWA) terminals designed by Eero Saarinen or the Sundrome Terminal (JetBlue).

Though there are several airports in the US and around the world with more passenger traffic, JFK is still a benchmark. Not only has it consolidated itself as the gateway which welcomes most passengers who arrive at the Big Apple, it has also become one of the world’s most iconic airports and the main entry point for tourism in the United States.

It handled 60 million passengers and managed 440,000 operations last year. It is expected to handle 100 million passengers by 2050. Its influence on the region’s socioeconomic context cannot be placed into doubt, since it generates more than 200,000 jobs in its surrounding area.

Despite the fact that the airport has undergone a variety of improvements over the last few years and that some of its terminals are currently being refurbished and enlarged, there is clearly a need to act on several fronts to ensure that the quality of the access routes to the airport and the services performed in it are in tune with the demands passengers expect in the 21st century. That is why the announcement of a $10 billion investment to upgrade the airport made by the Governor of New York, Mario Cuomo, is good news 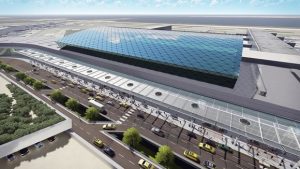 This will be one of the biggest projects in New York in recent decades and one of the largest airport improvement investments in the last few years. The renovation plan includes runway refurbishments, terminal enlargements and interconnections, new security resources, internal subway station and railway enhancements, along with an access highway improvement plan.

According the announcement made by Cuomo, the aim is to achieve “a unified, interlinked airport that changes the passenger experience and makes the experience of gaining access to it and moving around it easier”. It is also expected that two-thirds of the budget for this intervention will come from private investors as part of public-private partnerships.

According to Pat Foye, Executive Director of the Port Authority of New York and New Jersey, the organisation which manages the airport, “for every million passengers JFK cannot receive, the region loses approximately $140 million in salaries, $400 million in events and 2,500 jobs. Furthermore, JFK is one of the only large airports in the world which does not offer passengers a direct public transport journey from its city centre”.

Some links on this news:

Bloomberg
How to Remake the Most Famous Airport in the World