The notion we have had about the interior design of aircraft has to date been limited to the set of the proposals which manufacturers themselves have offered to airlines. With a catalogue in hand, airline companies have had the opportunity of choosing among the different configurations and selecting a series of customised elements such as the layout of classes, the number and size of seats, their arrangement, upholstery and accessories, cabin separators, etc.

Customising aircraft interiors has always been a sector which has focused more on small executive models not dedicated to commercial passenger transport.

However, in recent years we have been witnessing a trend in which the world’s wealthiest individuals have taken to acquiring large aircraft for their own particular use. Aircraft which usually carry hundreds of passengers are being reconverted to transport just a few dozen people by air. But things go much further than that. Once one has invested several million euros or dollars in a large aeroplane for individual use, why not customise it fully?

As a matter of fact, there are already several dozen large aircraft (including gigantic Boeing 747s and Airbus A380s) whose owners have decided to invest large sums of money in customising them to the tiniest detail. This includes any extravagance they may come up with, however strange it may seem.

This trend has led to the appearance of new companies dedicated to doing this kind of work, which involves a large multidisciplinary team of designers, stylists, engineers, architects and specialists in a wide variety of fields like sound measurement, furniture, ergonomics, lighting, painting, materials, etc. Depending on the aircraft in question, customising an aircraft can involve a workload of thousands of man-hours.

Some airlines have taken advantage of this trend and have chosen to differentiate themselves from the competition by redecorating cabin interiors. One of the most recent examples of this is an Icelandair aircraft that has been completely “dressed up” by Aurora Boreal, both inside and outside.

There is no doubt that aircraft interior design is a sector undergoing strong growth which is generating new opportunities. Would you like to know more about what can be done to the interior of an aircraft? 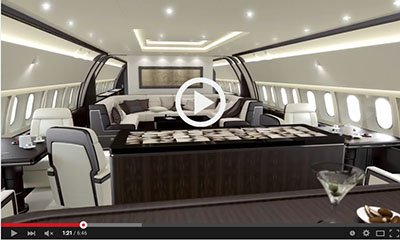 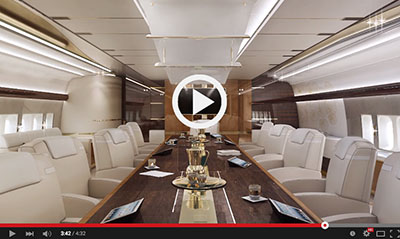