One of the strangest, yet interesting, aircraft we can see in the air is the SOFIA. This acronym corresponds to Stratospheric Observatory for Infrared Astronomy. It is, in fact, a Boeing 747 that was reconverted a few years ago to house a 2.5 metre telescope in its interior, along with a series of astronomical observation and study equipment.

The project is being carried out jointly by NASA and DLR (German Aerospace Centre). Its aim is to have a telescope available that allows observations to be made from the stratosphere, thereby avoiding the atmosphere’s infrared radiation filter. This is why the aircraft’s average observation altitude is 13,000 metres, where 99.8% of the water vapour contained in the atmosphere is avoided. The importance of this kind of studies is due to the fact that infrared observations reveal cold states of matter and allow the hidden universe to be explored. 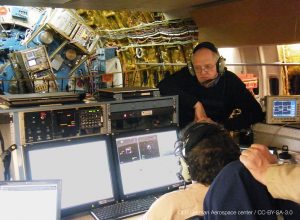 An added advantage of having an aircraft-mounted telescope available is its mobility. The SOFIA can perform observation and study programmes from any point in the Earth’s stratosphere and can therefore be aimed at any part of the universe.

Some important findings made by the SOFIA were recently released in March 2015. They refer to the links between supernovas and the formation of planets like the Earth.

The aircraft which transports this impressive 2.5 metre telescope is a specially adapted Boeing 747 SP (Special Performance). It is considerably shorter than conventional jumbos and only 45 units were manufactured. It was built in 1977 and transported commercial passengers for Pan Am (which christened it as the “Lindberg Clipper”) and United Airlines. It was acquired by NASA in 1997.

In order to adapt it to its new mission, the back of the aircraft’s fuselage had to be sliced and a series of structural modifications made which would allow it to house the telescope. The engineers in charge of the adaptation had to face significant challenges. 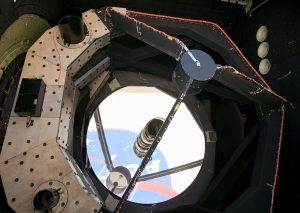 To start off with, they had to create a rigid, yet light, support for the telescope, so as not to overburden the aeroplane. This also involved adapting the aircraft’s external look, giving it a “hunchbacked” appearance. They also had to create a system to stabilise the aircraft’s movements to ensure vibrations did not affect the observations. Another no less important issue was to eliminate the turbulences which would surely be generated when the enormous door protecting the telescope is opened.

Precisely that huge door was one of the major challenges. Measuring 16 by 23 metres, it had to be opened in-flight at cruising speed under extreme pressure and temperature conditions. Furthermore, can you imagine the air’s impact on the open door?

All these challenges were successfully resolved in practice. The SOFIA made her maiden flight in April 2007 and the first successful observations were performed in 2010, opening up a new window for astronomical observations. NASA foresees it will have a useful life of 20 years.

You can find out much more about the SOFIA on the video by clicking on the following link…. [Video]