An interview with Alan Lamond

“European engineering & architecture firms must offer airports what they are looking for: improved passenger experience within environmentally reduced footprints, while offering great value to airlines and passengers”

Alan Lamond is Aviation Director at Pascall+Watson, one of the world’s most experienced aviation architects. He has been involved in the design and delivery of over 70 different terminals, at over 60 airports, in over 30 countries. Recent projects include the recently opened terminal in St Petersburg, new mega airports in Beijing and Mexico City, as well as numerous studies to improve capacity and passenger experience in Asia, Africa and Europe. He is also the former Chairman and Vice Chairman of the British Aviation Group, the leading representative body for UK companies involved in the airport and aviation development sector.

The outlook and the trends for the future in the sector are nothing but positive, but how does European aviation compare to other markets? What role do European engineering & architecture firms play or what role must they aim to play?

First of all I’d like to point out that there’s a huge discrepancy between what we would call the “mature markets” (Europe & North America) and the “emerging markets”. The emerging markets are growing much more significantly than the mature markets. Nevertheless, I think there will be some airports in Europe that will be able to exploit their market position. Of course however there will be some losers and some winners in this competition across markets and airports. Take Liverpool and Manchester in the UK for example. A few years ago Liverpool Airport began to grow significantly, at the expense of local competitor Manchester Airport, but more recently that role seems to have reversed once more back to Manchester. There are most certainly some interesting dynamics in mature markets such as Europe.

In terms of the role of European engineering & architecture firms, I think it’s really in assisting those airports to exploit their full potential. They must be able to offer airports what they are looking for, which is an improved passenger experience within environmentally reduced footprints, while offering great value to airlines and passengers. If we can get those things right, I think there will be some significant advantages for the experienced European architecture and engineering firms. We’ve got a lot of skills to offer and a great ability in getting additional capacity through facilities. In the years ahead these skills will become even more valuable. The reach of European consultants as a whole is tremendous. 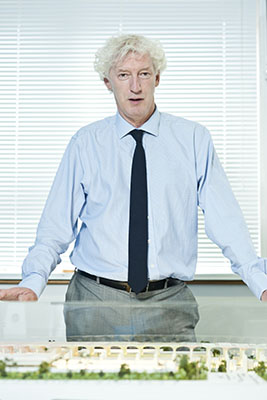 In terms of the aviation sector, how far are new technologies taking us?

In the near term, I don’t see any major transformations akin to say, the internet check-in, which dramatically reduced the space required for check-in halls. I think there will be major opportunities coming through within the notion of “empowerment”, using mobile technology to guide people and provide them with information allowing them to serve themselves. There’s an opportunity to simplify many of the processes that passengers have to go through. It’s certainly not beyond the imagination a proposition in which every passenger has a device that effectively contains passport data, flight details, baggage information. All these things will certainly be possible in years ahead.

The automation of passenger processes, self-bag drops and Personal Rapid Transit systems are leading to a reduction in costs for airlines and in time for passengers. How will these initiatives evolve in the future within airport management systems?

I think these technologies will certainly lead to significant reductions in cost. Much of the work that’s being done in the implementation of these technologies is focused on reducing staffing levels. This is a key issue for every airport and every airline, however they must also ensure that the staff that remain are much more customer focused and that they provide a skilled service, with more integrity.

In an increasingly globalised world, how is it possible to maintain and enhance the characteristics of an airport, while also reflecting the culture and identity of the country in which it is built?

I think this is a universal challenge for international airports. They have to face both ways. They have to deliver international standards, satisfying international passengers, while also representing the characteristics of the local environment. One project we’re quite proud of is the airport in Pathos, Cyprus, in which local art was used to great effect to represent some of the local characteristics. We are also currently working with Changi Airport, and the senior management team has a real passion to try and represent the very best of Singapore in every aspect of their facilities, from the way the passengers are treated to the way the local environment is handled. I think there are huge opportunities for designers to move forward in this sense.

One of the major challenges faced by the aviation industry today is dealing with the impact of climate change. How is Pascall & Watson moving forwards in this direction and what is its contribution to the market?

I think all the airport terminals that we are working on have an absolute conviction to try and find the most energy efficient solutions possible, with the greenest possible approach. We are exploring opportunities with different airports around the world to reduce some of the most energy-hungry elements such as air-conditioning. It’s all about shepherding scarce resources effectively; this is a key driver that we are seeing today in all airport projects that we are working on today. This applies to energy and also to other resources, such as water. Everyone has a real desire to be able to talk about their environmental performance with pride. People are working on this on every level, from ways of handling waste during construction, to designing buildings in a way that they can be built efficiently. One of the key factors today is the use of existing facilities to their optimum, this is the most environmentally efficient way to take on projects. We must try and avoid new greenfield construction projects, and work on brownfield sites, this is the most significant step towards becoming environmentally responsible.

It is fairly common today to read in the press that politicians are requesting that a particular airport be transformed into a “hub and spoke” airport as opposed to “point to point”. This is clearly an airline strategy, however, do you think that governments should be allowed to get involved and enforce these changes?

It is very difficult for governments to transform market dynamics without very deep pockets. This has been demonstrated in Qatar and the UAE for example, where they have transformed the aviation market using huge investments. They have been able to really exploit their geographic position, and this has been achieved with government help. On a smaller scale it is very much up to the airlines or the alliances to establish hub & spoke systems. The ability of the governments to create this is quite limited. Take the UK for example, the government encouraged BA to move to Gatwick in a hub & spoke setup and that didn’t work. Also something similar was tried at Manchester, which didn’t work either. The local catchment area is the real driver here. Frankfurt, for example, has made it work. With a reasonable sized local market, a huge commitment to Lufthansa and an alternative hub operation through Munich, this setup is a significant example of where the airline strategies can be used to create strong hub & spoke propositions. I am not an expert in the ins and out of politics, but I’m sure these airports have had political support to make these things happen.

What are, in your opinion, the best airports in the world and why?

I think Singapore is definitely up there. They have a really dedicated management team focused on dealing with the issues that matter to their passengers, and providing extraordinary service levels. I think they have clarity of vision which is laudable. I am also slightly biased, but I do still enjoy using Heathrow Terminal 5 too. After six years up and running I still think it handles people very efficiently for a big terminal, and it’s a pleasure to use. I have to say I also really like Dublin Terminal 2. On a smaller scale I think it does some tough things very well. It has a good passenger service level, and on the whole there is a great pride within the Dublin Airport staff as a whole.

Tell us in one sentence, how do you see the airport of the future?

The airport of the future will use the latest technological advances, to offer a much improved passenger experience, within a minimal environmental footprint, and offer great value to airlines and passengers.