Airports, the Schengen Treaty and security 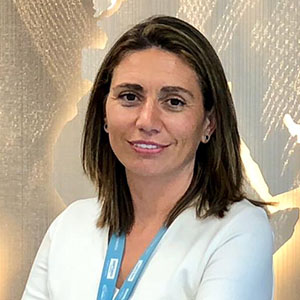 How would the revocation of the Schengen Treaty affect airports? Would it be possible to conduct more passport checks on passengers with reasonable service levels?

The recent terrorist attacks in Paris have reopened the security debate in Europe. Air transport is highly sensitive to this kind of events due its strategic nature and media repercussions.

Repealing the Schengen Agreement can be achieved through a simple signature. There is no way, however, to implement such revocation instantly.

In an effort to ensure their citizens’ security, some countries have broached the possibility of repealing the Schengen Treaty. This would involve reintroducing the use of passports on intra-European flights.

Are European airports prepared to deal with a larger number of international passengers? 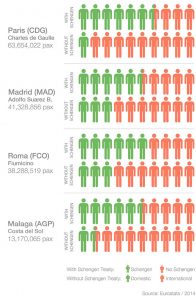 At Madrid Barajas Airport, for instance, such a situation would mean increasing international passenger numbers from 36% of the total to 71%:

The increase would be even more notable at Malaga Airport, which operates mainly European flights. If the Schengen Treaty did not exist, 85% of the passengers would be international traffic, as opposed to 44% today.

Airport terminals are complex buildings. Their flexibility already poses a challenge for airport planners. A large number of variables affect their design:

Logically, socio-political uncertainties significantly increase the difficulty of optimising a terminal’s design. Passport control regulations logically affect the surface area and distribution of halls dedicated to this process. Any change to such regulations is especially pressing in the case of an already existing terminal. In this case, refurbishing the terminal to cope with such a change can be a truly complex task. 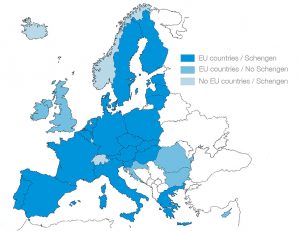 Initially, an increase in the number of passengers who have to pass through passport controls can be dealt with by reducing service levels; that is to say, by decreasing the average surface area per passenger and increasing waiting times. But this situation cannot be other than provisional.

Another measure could involve implementing the use of swing gates (doors that can be operated on domestic and international flights by installing controls prior to boarding). This solution requires increasing the number of personnel of the country’s law enforcement agencies. It is likewise a temporary fix. Swing gates lead to low productivity ratios. For example, it is not efficient to have to a border agency officer waiting for 10 minutes at a boarding gate to check the passport of a passenger who arrives late. This does not happen in a conventional passport control hall. Swing gates therefore involve an increase in personnel costs which is not sustainable in the long term. They likewise involve an increase in boarding times. Aircraft turnover times would therefore rise and their productivity would fall.

Repealing the Schengen Agreement requires a significant increase in the number of passport control counters and surface areas for passenger queues. Managing to liberate space involves doing building works in an operational terminal. These actions are costly, complicated and require significant mitigation measures to avoid affecting normal passenger flows. Furthermore, implementing these changes usually requires lengthy administrative processes. Repealing the Schengen Agreement can be achieved through a simple signature. There is no way, however, to implement such revocation instantly.

Are current European terminals ready to cope with drastic changes in European immigration policy? I am afraid that very few are.

One conclusion is clear. It has once again been shown that this is a changing business. Above all else, airport terminals should be flexible. Flexibility is a cost we all need to assume, including: passengers, planners, operators and both public as well as private owners.