Aerial robots: A future to discover or imagine

Even as recently as three or four years ago, we could not have envisaged the extent to which aeronautics and robotics would have become part of our lives. What’s more, everything seems to indicate that this is merely the beginning.

It is well known that technological advances progress exponentially rather than linearly. Each innovation has a huge impact on its sphere of influence which, in turn, creates the breeding ground necessary for new innovations. A multiplier effect always occurs.

If we consider the advances that have taken place separately in both aeronautics and robotics, imagine what they could do together.

The aerospace industry is no exception to this fact. There are constant advances in design, structures, systems, materials, software, processes, etc. Each new aircraft harnesses the innovations of its predecessors (at least those from the same manufacturer) while creating a legacy of several hundred new innovations.

Most of these developments tend to be confined to the industry itself, but we must not lose sight of the fact that end users are the ones who ultimately benefit from each innovation.

One of the aeronautical advances that has had the greatest overall impact on society in recent times is the development of unmanned aerial platforms, also known as UAVs, RPAS or drones. 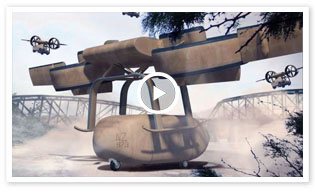 Beyond the novelty of seeing a small, human-guided device flying, the fact is that these devices can offer a range of possibilities. It’s not just a matter of leisure. Companies from all sectors have already made provision in their business plans to analyse all the potential applications of these devices that may be of benefit to their business.

Parcel delivery, surveillance, fire detection, assistance and help in disaster zones, filming, searches, pest control and an almost endless list of potential applications are part of this world that is opening up before us.

The other variable that needs to be incorporated is robotics, which has similarly entered homes and industries to make things possible that, until recently, we had only seen in films. Virtually every company or home has robots that make our lives easier.

But what if we combine aeronautics and robotics?

We invite you to read a great article published by BBC News in which these issues are addressed: What jobs will flying robots be doing in future? (BBC News, by Mark Smith)