What is a METAR code and how do you read it? 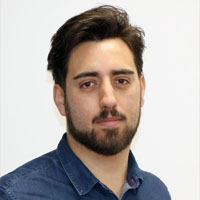 Everyone understands the close relationship between meteorology and aeronautics. For an airport, having accurate, complete and up-to-date meteorological information is vital to its operations, given that operating procedures vary depending on the weather.

METAR is the name for the report that communicates meteorological information and the weather forecast, which are key elements for air traffic management.

For this reason, all airports have their own weather station, which provides ATC with information on existing weather conditions at the airport. From there, the information is distributed to the other airport stakeholders for whom it is relevant (mainly pilots and the Operations department). Pilots act according to this information, following the procedures established for this purpose, and the Operations department makes decisions on the runway configuration to be used.

The weather information is transmitted through a code known as METAR (METeorological Aerodrome Report), which consists of a series of letters and numbers that provide the information in an abbreviated and standardized form. These codes, whose origin dates back to 1968, began to be fully used in aviation at the end of the 1980s and are accepted internationally, although in North America they are used with slight differences.

The information contained in an international METAR code always takes the following order: Place – Date and Time – Wind – Visibility – Phenomena – Clouds – Temperature – Pressure. This ensures that it is easy to understand these codes once you have read a few:

The ICAO code of the airport which has issued the report.

This consists of a six-number code followed by the letter Z. The first two indicate the date of the METAR code, while the next four indicate the time at which it was published. The letter “Z” indicates that the time is “Zulu”; that is to say, corresponding to the Greenwich Meridian, known as Coordinated Universal Time (UTC).

The METAR code provides the direction of the wind relative to true north, as well as the average wind speed expressed in knots.

Indicates the horizontal visibility expressed in metres. A visibility greater than 10 km is indicated by 9999. If the visibility is less than 2000 m, the existing RVR should be indicated. 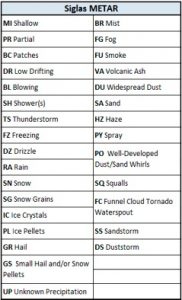 The existence or non-existence of significant weather phenomena are indicated with the following acronyms (see table):

The METAR code indicates the cloud cover expressed in ‘oktas’ of sky occupied by cloud, and indicating the height of the cloud ceiling. To this end, the sky over the airport is divided into eight sections and, depending on how many eighths of sky are covered, the following information is given:

The height of the cloud layer (cloud ceiling) is shown in hundreds of feet (ft), just as flight altitude is measured.

If there are no clouds or significant weather phenomena and if visibility is at 10 km or greater, the acronym CAVOK (Ceiling and Visibility OK) is used.

This consists of a four-number code. The first two numbers indicate the temperature at the airport, and the remaining two indicate dew point temperature, both expressed in degrees Celsius.

This consists of a Q followed by a number (usually four digits) that indicates the airport’s existing QNH, that is to say, the pressure at sea level deduced from the pressure existing at the airport, expressed in hectopascals.

Lastly, if the key “NOSIG” appears after the METAR, this indicates that no significant changes in weather conditions are expected in the two hours following the publication of the METAR.

As the proof of the pudding is in the eating, we offer a couple of examples to better understand how the METAR code works:

No significant changes for the next two hours.

Wind variable between 320º and 20º with respect to Geographic North

To put all this into practice, I invite the reader to decode the following METAR codes:

(Tip: if this seems too complicated, there are pages such as Metar Reader that serve to decode any METAR).