Almost a hundred commercial aircraft have suffered in-flight incidents as a result of volcanic dust clouds in the last 35 years. One of the best known events involved a British Airways Boeing 747 whose four engines stopped while overflying Indonesia in June 1982. Another 747 belonging to KLM suffered the same type of incident above Alaska some years later. These incidents were caused by the Galunggung and Redoubt volcanoes.

Few natural phenomena can match the awesomeness of a volcanic eruption. Believe me, if we can view one at night, it is something that cannot be easily forgotten. However, as in other facets of life, what provides us with beauty on the one hand can also, on the other, threaten us. Apart from the danger the eruption in itself entails, there is another hazard that particularly affects aircraft: ash clouds. 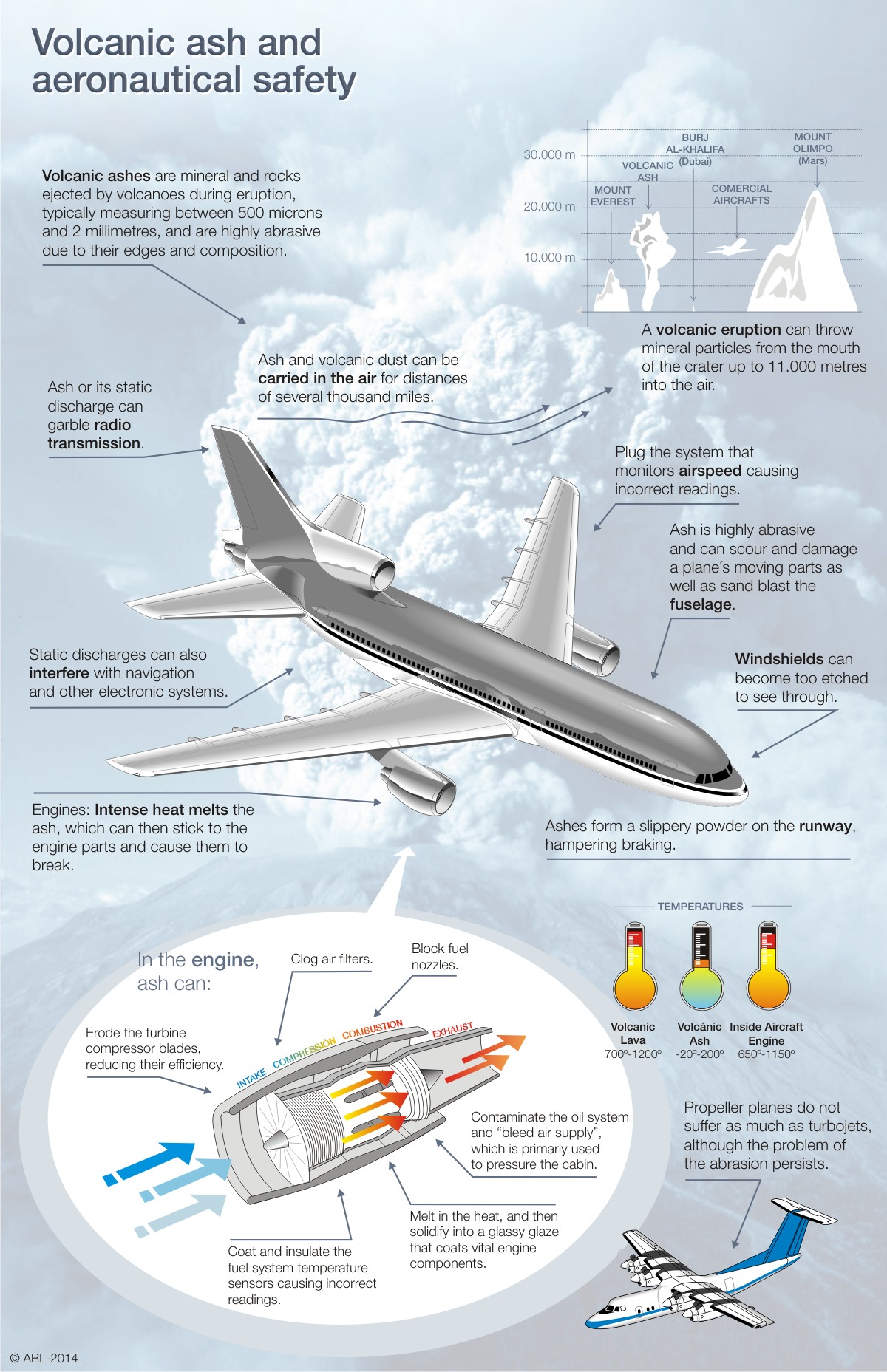 A recent episode of a phenomenon of this kind, the eruption of the Eyjafjallajökul Volcano in Iceland in 2010, grabbed the headlines and was monitored like never before. However, there have been many other lesser known eruptions like that of the Popocatepetl Volcano in Mexico, Mount Etna in Italy, the Sangeang Api Volcano in Indonesia, the Puyehue Volcano in Chile or the Ubinas Volcano in Peru, along with several dozen more, whose effects have included aircraft flight suspensions in their surrounding areas due to the threat posed by their ash emissions.

The case of the Icelandic volcano was especially significant. It gave rise to the largest closure of airspace since the Second World War and had an impact on European airlines amounting to 1.7 billion euros, whilst its effect on global GDP totalled almost 5 billion euros.

Contrary to what some people may think, the problem does not reside in the remote possibility of an eruption literally blowing away an aircraft passing overhead or that the heat of molten lava (between 700 and 1,200 degrees centigrade) could melt any object passing vertically above it. It is hard to imagine an aircraft being authorised to approach a volcano close enough for something like this to happen. The danger we are referring to here is the dust expelled by a volcano, whose geographic scope can be continental in size.

But why can volcanic ash pose a danger to aircraft?

There are four essential reasons:

Not all volcanoes are potentially dangerous in this regard. Hawaiian-type volcanoes, some of which are the most active historically, do not emit ash. Vulcanian or Vesubian type volcanoes, on the contrary, are highly dangerous due to the type of eruption, the fact that they usually emit ash, as well as due to other associated phenomena.

ICAO set up in the 80´s the International Airways Volcano watch, as well as a series guidelines and operating procedures

In response to the evidence of some aeronautical incidents caused by ash, like the ones mentioned above, the ICAO in collaboration with the WMO (World Meteorological Organisation) set up the IAVW (International Airways Volcano Watch) in 1987 in order to monitor any possible hazards to air traffic resulting from volcanoes around the world. A series of guidelines and operating procedures aimed at minimising the impact of eruptions and increasing safety levels were drawn up from that moment.

After the Icelandic eruption of 2010, the ICAO also entrusted the IVATF (International Volcanic Ash Task Force) to assess the needs of civil aviation in order to foresee this kind of events, as well as to determine the necessary actions in each specific case. It also designated nine regional meteorological centres to specialise as volcanic ash advisory points (London, Toulouse, Montreal, Washington, Anchorage, Tokyo, Darwin, Wellington and Buenos Aires). These centres usually issue three kinds of standardised information:

Alongside the work done by official agencies, some companies are also dedicating significant efforts to conducting R&D work aimed at fine tuning tools that allow for the early detection of volcanic ash in the air and, thus, allow preventive action to be taken.

The most recent success story was carried out by a group led by Airbus, which also involved companies like Easyjet and Nicarnica Aviation. They tested a system called AVOID with outstanding results. The system is installed in an aeroplane and has been able to detect the presence of ash in front of the aircraft at a distance of 60 km. In addition, it also provided data on its density, concentration and mobility in advance. Having such data available sufficiently in advance not only allows the crew to be alerted about a possible hazard, but also to put a suitable protocol into effect that allows its effects on the flight to be minimised.

The AVOID system is a device that provides real-time data based on a fast sampling of images projected from synchronised infra red cameras. Once the information is obtained, it is combined with GPS information and air speed data. A three-dimensional map of the ash cloud and of its foreseen trajectory is thus obtained. Depending on the ash concentration, this technology allows ash clouds to be detected at a distance of between 50 and 100 km during the daytime and at night. This gives the aircraft’s pilot an advance warning of 7 to 10 minutes at normal cruising speed.

Furthermore, this information is not only useful for the aircraft which detects and processes the data, but it can also be shared with regional centres and therefore keep other aircraft which are not equipped with the system informed.

Contrary to what some people may imagine, most natural phenomena cannot be controlled. However, there is no doubt that technology and knowledge are key factors to mitigate their impact. For its part, one of the aeronautical industry’s priority objectives is to take appropriate measures in the areas of information, organisation, prevention and innovation in order to ensure maximum safety levels are maintained.