Since the beginning of time, humankind has constantly tried to improve, which has resulted in increasingly unbelievable feats. The field of aeronautics is possible one of the fields where this is more noticeable. It’s the story of “more”: more speed, more height, larger, more electric, more efficient…

Until very recently we were impressed with an Antonov An-225, the current world’s largest aircraft in service and with a large amount of Guinness World Records. However, now there is a larger and more powerful aircraft in the field: the Stratolaunch. 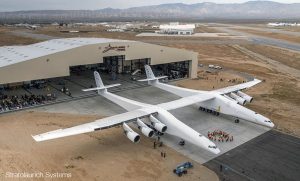 Its purpose, at least for now, it’s not to carry passengers or heavy loads, but to put loads into orbit at a decreased cost, which could be down to 70% less of what it costs to do a conventional launch using traditional rockets.

The company that manufactures this huge aircraft, Stratolaunch Systems Corporation (Vulcan Aerospace), is owned by the co-founder of Microsoft, Paul Allen, who joins the journey of other technology entrepreneurs who looked at the sky.

This story begun in 2010 with the first plans for a future cargo aircraft that would normalize the access to the low Earth orbit that would probably provide support to NASA missions. In 2011, Paul Allen associated with engineer Burt Rutan (Scaled Composites), who had been previously involved in the development of Virgin’s SpaceShipOne. Afterwards, two Boeing 747 were purchased from United Airlines and used for parts, particularly engines and electronics.

The result was a huge aircraft with two cabins connected by a wing. The right cabin will carry the crew and the left one the flight systems. It has a wingspan of 117 meters (longer than a soccer field), 72 meters in length, 15 meters high and an unloaded weight of 227 tons. The thrust will be provided by six engines from the aforementioned Boeing 747. A significant percentage of composites have been used for its construction. According to the company, it will be able to take off with a payload of 590 tons, but it will need a runway at least 3.6 kilometres long that will be used by 28 wheels.

Indeed, Paul’s Allen goal of turning the access to the low Earth orbit into a routine process is now much closer.