An RC system similar to the ones employed for model aircraft was used to guide aircraft and even flying bombs as early as the beginning of the 20th century during the First World War. Later, a self-guidance system was used for the very first time during the Second World War (more specifically in 1944), so that there was no need for a human being to pilot the aircraft. After the end of the war, interest in these autonomous systems fell away. Interest in them was rekindled, however, some years later after they were used once again in the Yom Kippur War of 1973 and their tactical usefulness was revealed. Though the first uses of self-guidance systems were military in nature, they are today used for civil applications like aerial surveillance, fire extinction, geographical studies, etc.

Both the entire process and the machine’s calculation were done mechanically in the first guidance systems.

But let’s go back to their origins. The V1 and V2 flying bombs manufactured by Germany during the Second World War are well known and they should be mentioned in relation to their guidance system. This was a mechanical system lacking any electronic control. It was based on keeping the rockets horizontal by means of pendulums, gyroscopes, accelerometers and chronometers.

The general system to keep the rockets horizontal was based on a pendulum with a very carefully calculated weight, so that it acted on four switches which set inclination at the bow, stern, starboard and port sides, triggering a signal indicating on which side the aircraft’s movement had to be corrected. It acted on the wing ailerons to change the aircraft’s roll and on the tail elevators to change its pitch.

The V1s were launched from catapults that launched the aircraft at the initial velocity needed for it to start flying. The V2s were equipped with their own launch engine. Once they were launched, the gyroscope was in charge of maintaining the desired angle through mechanical systems overseen by a chronometer which counted the time the bomb should be ascending. Once that time had elapsed, the chronometer triggered another command to the gyroscope and its system to place the rocket in a horizontal position and it was kept horizontal by means of the pendulum system. The accelerometer calculated the rocket’s speed and, along with the chronometer, it was in charge of calculating the moment it was above the target. At that precise moment, the engine’s fuel supply was cut off, the engine stopped and the V2 fell to the ground in a parabolic trajectory.

It was a simple system at first sight, but highly complex from the era’s mechanical and scientific standpoint. 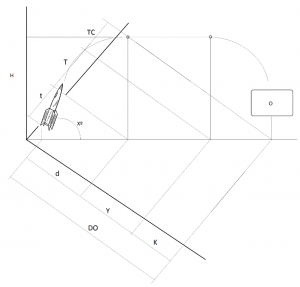 Before of the launch, some calculations were made to ascertain the distance to the target O (DO) from the launch point and its azimuth. These calculations were made through measurements from aircraft, air bombardments of the targets, aerial photographs and aeronautical measurements. If the speed at which the vehicle would fly (V), the height at which it was meant to fly (H) and the launch angle (Xº) were known approximately, it would need time (t) to reach said height. It should be taken into account that the V2 could be considered as a stratospheric rocket, since it was capable of making suborbital flights and was propelled by liquid ethanol and oxygen engines capable of reaching a maximum speed of 5760 km/h. The V2s were launched vertically from mobile platforms (90º). The V1s, for their part, were equipped with pulse jet engines. They were capable of reaching a maximum speed of 630 km/h and were launched from catapults. The V1’s launch angle was between 45º and 30º, though some of them are known to have been launched from bombers to enhance their performance (0º).

From the moment it reached its desired height, the vehicle would have travelled (d) km and, taking into account that the target is at (DO) km, the remaining distance would be (Y) km, which would be the time (T) it would take to reach it at its speed. However, seeing as it would have travelled (K) km from the moment the engine is cut off to the time it reached the ground, that travelling time has to be subtracted from the total (TC).

Both the entire process and the machine’s calculation were done mechanically. Errors were corrected by adjusting springs and gears, which had to be modified after different launches to check the margin of error obtained compared to what had been programmed.

Everyone knows Germany had spies and double agents in the United Kingdom during the Second World War. Their work was also important to ensure the effectiveness of these guidance systems. After the first launches, they would send information about where the bombs fell, so that their direction could be corrected by adjusting the guidance systems’ controls. The fact that many of these bombs did not reach their targets is also known. This was because some of these agents favoured the British and chose to indicate impacts several kilometres away, causing many of the bombs to fall a long way before reaching their targets after the adjustment.

There is no doubt that the scientists, engineers and technicians who took part in the development of these missiles could not imagine the accuracy, effectiveness and versatility the guidance systems they themselves started to use would have seventy years later.