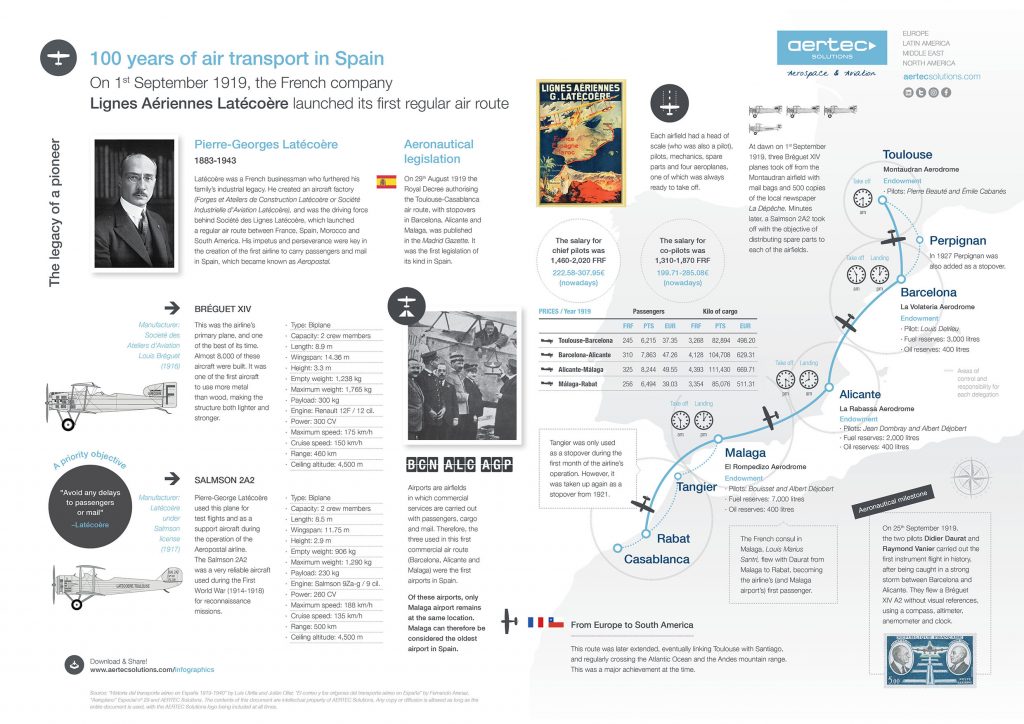 Nowadays, thousands of aeroplanes are flying over our heads all the time. Flying is an everyday activity that forms part of our lives, and we see it as completely normal. However, a hundred years ago flying was a real adventure that was fraught with all kinds of risks. At the time, aeroplanes were heavy and inefficient. Moreover, weather conditions could often constrain flights, and many countries were reluctant to have aeroplanes flying over their territory, especially if they were from foreign countries.

It was in this context that the figure of Pierre-Georges Latécoère emerged. He was a businessman with great initiative, a visionary and a humanist with strong convictions. And he was determined to use those precarious aeroplanes, made of duralumin, wood and canvas, to provide services for normal civilians. His goal was to unite people on three continents, departing from Toulouse and arriving (with passengers, cargo and mail) at Santiago de Chile. When Latécoère conceived the project in 1918, his plan was unthinkable. The technical, human and economic resources needed for the endeavour were enormous. But he did it.

During the first era of flying, in 1919, flights were carried out between Toulouse and Rabat, which involved crossing Spain and using some of its airfields as stopovers. This meant that Latécoère’s airline was the first regular commercial airline for passengers, cargo and mail to operate in Spain, transforming the airfields it operated in into the Iberian Peninsula’s first airports.

Latécoère’s obsession with punctuality and the need for both passengers and mail to reach their destination on time was unwavering. For this reason, there were always several spare aeroplanes in each airfield, as well as mechanics and pilots who had to ensure that all time schedules were complied with as scrupulously as possible.

Some of the greatest pilots of the time flew with this airline. Names such as Henri Guillaumet, Jean Mermoz, Didier Daurat, Henri Lemaître and Antoine de Saint-Exupéry (the famous author of The Little Prince) stand out. There may never have been another such group of exceptional people in the history of aviation pioneers. That is why a project that on paper seemed impossible would be successfully carried out.

It was a hundred years ago that Latécoère created the airmail line (La Ligne) that linked France, Spain and Africa. In this infographic we show some data that help explain and contextualise the importance of that project and everything that came after it.