Interview with Pedro Duque, Astronaut, Engineer and Minister of Science, Innovation and Universities in Spain. Member of the Royal Academy of Engineering of Spain. Prince of Asturias Award of International Cooperation.

“Being in space gives you a lovely feeling of peace […] It also makes you realise how fragile our planet Earth actually is.”

I was 6 years old, and at that time we would spend part of the summer in Cestona, Guipúzcoa. I remember watching the Moon landing on a black and white television, although I’m not sure whether I was watching it live or not. I think all the kids who watched Jesús Hermida’s broadcast on that day dreamt of becoming astronauts, although in Spain at that time it seemed impossible that a Spaniard could ever be an astronaut.

50 years on from the first Moon landing, NASA has announced its intention to return in 2024. Why do you think it has taken so long to set a date on another space mission like this one? What do you think a moon landing is going to be like 55 years after Neil Armstrong first achieved it?

It has taken so long because the means necessary to return to the Moon have not been put back in place. It requires a unique impetus from the public authorities. The ambitious Apollo programme was heavily promoted by President Kennedy. Years later, Nixon reduced NASA’s budget to a fifth of what it had been, and it has not recovered since.

Now the US wants to take up the project of returning to the Moon. I met with NASA a few weeks ago, and they are very excited about the Artemis mission, which is going to take them to the Moon again in 2024. This will also be a preliminary step to embarking on the first mission to Mars. A base on the Moon would be feasible and would allow the development of resources that could be useful in the future exploration of other planets and bodies in the Solar System. Also, the very fact of setting that goal means we will further develop transport, working methods, metallurgy, etc.

Europe has to decide if it wants to be a protagonist in this new milestone for humanity. Today it would be less risky than it was 50 years ago, but it would still be risky. 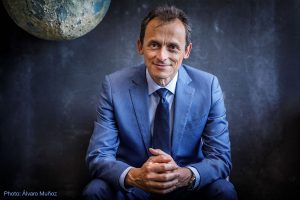 How has the role played by Spain and Europe in the space race evolved in recent years? Reviving the joint EU-ESA Space Council is an important step towards a position of greater leadership…

Europe has never had the same level of investment as the US, and we still invest ten times less than they do in manned programmes. It was important to revive the Space Council (whose last meeting took place in 2011) in order to strengthen Europe’s position. Spain has promoted this meeting, which will continue in 2020, under the German presidency of the EU. As chairman of the Ministerial Committee of the European Space Agency, I am advocating investing in going to the Moon. The meeting in Seville this November, where ESA’s new multiannual budget will be approved, is going to be decisive.

In Spain, we are working to achieve a general increase in the budget for science, innovation and universities. If this increase takes place, we will boost our participation in ESA, with the aim of at least matching the European average.

This important milestone in the history of humanity is being commemorated all over the world. Is this making you think more about your own trips to the International Space Station? What does it feel like to see the Earth from 400 km away?

It is an important commemoration that we should be making the most of, because it really is being given a lot of importance all over the world. Regarding my own trips to the International Space Station, being in space gives you a lovely feeling of peace, although you also have a lot to think about, so you don’t have much time to reflect. It also makes you realise how fragile our planet Earth actually is; how thin the atmosphere is. That’s why we must take action against the climate emergency we are currently experiencing. At the moment, this is the only planet we have to live on.

Do astronauts live with their feet on Earth and their head in the Moon?

Your feet and head should always be in the same place. Right now, as Minister of Science, Innovation and Universities, I am working towards getting Europe, and therefore Spain, a leading role in our next manned missions. It is within our grasp for a European person to be on the first mission to Mars, and there is no reason this person couldn’t be Spanish.