“Today, disruptive game-changers such as electrification, digital technologies and automation are shaping the new era of aviation. “

Aviation has an important role to play in reducing noise as well as greenhouse gas emissions, regardless of traffic growth. What are the current R&D priorities for improving its environmental performance?

As a growing source of emissions, aviation has a key role to play in meeting the European Green Deal targets, namely a 55% reduction in emissions by 2030 and a climate neutral continent by 2050. Aviation is one of the most difficult industries to decarbonise rapidly, however the European aviation ecosystem is committed to transformation and to an accelerated mitigation of its impact on the climate.

To achieve this, the European aviation industry must accelerate improvements in the environmental performance of vehicles and flight operations, which will also enable it to remain globally competitive and seize the opportunities offered by a fast-changing global economy.

Many of the efforts needed to enable aviation to become climate neutral are beyond the remit of research and innovation (R&I). Numerous promising climate neutral solutions have been supported under previous public and private research and innovation programmes, either at the EU, national, or regional level. Some of these solutions need to be accelerated and deployed.

It is now time to select and push forward the most promising of these solutions with large demonstrators – in close cooperation with industry – in order to deploy them and enable concrete results to be achieved by 2030.

In addition, air traffic management (ATM) shows room for improving efficiency by making progress on the implementation of the Single European Sky (SES) and through supporting further R&I on the Digital European Sky.

Finally, according to the latest analysis, the fields of aviation R&I that can offer aircraft efficiency gains towards a better environmental performance are: 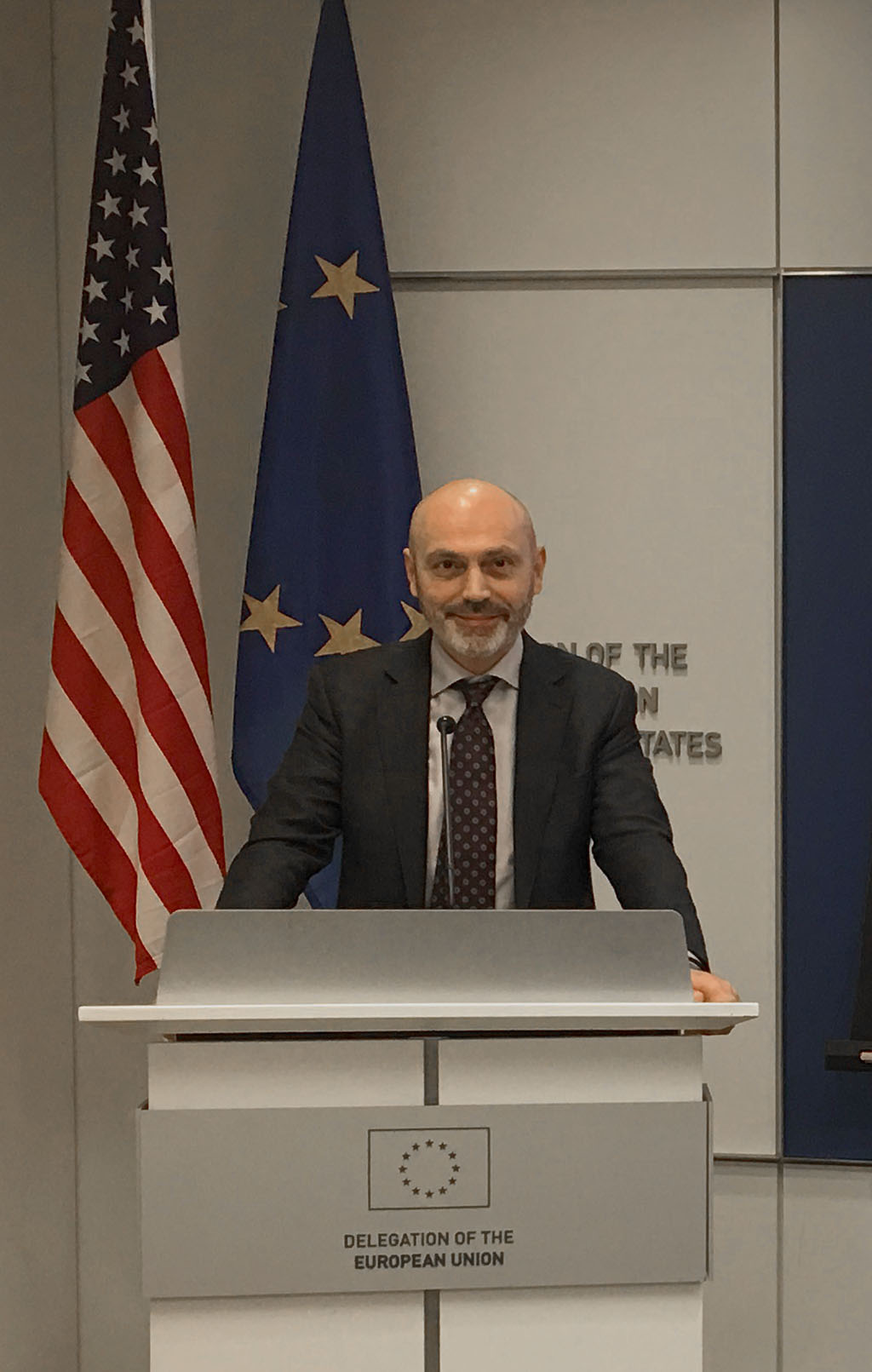 The environmental efficiency of aviation continues to improve but future CO2 emissions are expected to increase by a further 21% to reach 198 Mt in 2040. Do you think decarbonisation will possible by 2050?

Recent technological and operational improvements have significantly boosted the energy efficiency of air transportation. Current aircraft are about 80% more fuel efficient per passenger kilometre, and consequently greener than aeroplanes in the 1960s.

The aviation industry was the first sector to set a target for CO2 emissions reduction and aims to achieve a 50% reduction of emissions by 2050 when compared to those emitted in 2005. However, there is no single technological or other solution available today that would allow aviation to become climate-neutral by 2050. It is widely agreed that decarbonisation of aviation in the short term depends on incremental technological advancements and the use of sustainable aviation fuels. Over the medium to long term, this calls for new aircraft with specific design improvements and different prolusion systems.

I cannot forecast whether or not aviation will be fully decarbonised by 2050, but I am convinced that both the private (which is, by the way, already dedicated to doing so) and the public sectors are strongly committed to reaching this goal.

At the end of 2015, the European Commission published a comprehensive strategy for the European aviation sector. What are the tangible results today of the measures proposed in that strategy?

Let us try to analyse each of the priorities, bearing in mind that the Aviation Strategy for Europe was issued in December 2015, and that therefore we do not yet have a clear assessment of all its outcomes.

Regarding the first priority, “Place the EU as a leading player in international aviation, whilst guaranteeing a level playing field”, I can emphasise that Europe is playing an important role at the international level. For example, the European Commission is successfully steering the actions and inputs of Member States at ICAO level, notably in the development of international rules on aviation emissions (CORSIA), and some important trade agreements that include aviation have been finalised in recent years.

In addition, the EASA is cooperating effectively and efficiently with the FAA and has signed important agreements with several other governmental agencies around the world.

There is still room for improvement in guaranteeing a level playing field in some specific areas, but this is a more general trade objective that concerns several industrial sectors, and not only aviation.

For the second priority, “Tackle limits to growth in the air and on the ground”, we must acknowledge that despite the achievements of the SESAR joint undertaking since it was launched, and the introduction of the SESAR deployment office, a lot remains to be done. R&I efforts must be expanded and accelerated to deliver a new collaborative and distributed infrastructure for European ATM in a timely manner. But, whilst R&I can increase capacity, this alone cannot solve the problems caused by a fragmented series of national airspaces.

As regards the objective of maintaining the EU’s high safety standards alongside growing air traffic, European aviation has maintained an impressive safety record. In particular, the key role of the European institutions in financing dedicated research activities and enforcing safety regulations and operational standards should be underlined. The role of the EASA in ensuring the highest safety standards should not be underestimated.

In aviation, safety must always remain paramount. Aviation is generally seen as being the leader for safety amongst the four transport modes (air, rail, sea and road). Dedicated research on safety issues helps to maintain this position of confidence with passengers and businesses alike. Commercial aircraft accident rates have fallen steadily from 1958 onwards, including in the last two decades, which have seen a doubling of commercial air traffic. These improvements are due in large part to successful technological breakthroughs, enhanced safety governance and a strong focus on pilot training and crew resource management.

Finally, regarding the last priority, “Make progress on innovation, digital technologies and investments”, it is important to emphasise the huge contribution to innovation made by the large variety of European projects, from collaborative research to public – private partnerships. By developing technologies that could make aviation more environmentally-friendly, safer, and delivering a better experience for passengers, the projects financed by the European Commission are also making an important contribution to the EU’s sustainability and transport policy goals.

The SESAR 2020 (Single European Sky ATM Research) will bring new ideas to the market and increase the pace of change in ATM. What we should expect from this programme?

In Europe, we currently have an outdated Air Traffic Management system that does not perform optimally and is reaching its limit in terms of its ability to manage an ever-increasing volume of different types of air traffic.

The current system needs to be transformed to enable the exploitation of emerging digital technologies and to accommodate new forms of air vehicles, including drones. The current ATM infrastructure is the result of gradual historical evolutions at a national level, leading to a fragmented system with limited interoperability between countries.

ATM is a critical element in the European air transport value chain and is vital to connecting regions and making Europe a global hub for mobility and prosperity. The SESAR programme should aim at ATM modernisation and should have a greater focus on increased efficiency and effectiveness while sustaining or even improving the levels of safety, security and environmental performance. At the same time, it must also recognise the need to provide solutions to address critical bottlenecks in capacity.

European disruptive technologies have been implemented in the world aviation market, including a genuinely new generation of air vehicles and ever-more efficient, environmentally friendly and quiet engines. What’s the role of Europe in the improvement of the global aviation market?

Currently, the European aerospace industry manufactures 50% of the global civil aviation fleet. This means that it has a strong responsibility to address the technological and operational breakthroughs that will lead to climate neutrality.

As world leader, it is paramount that the European industry consolidates its market share by being the first to develop new green and safe technologies.

The European Commission will support more research and innovation activities that help European industry to develop and introduce safe, reliable, and affordable low- to zero-emissions air transport for citizens. This will also help ensure that Europe’s industrial leadership is maintained and strengthened throughout the transition to a climate neutral Europe by 2050. Public acceptance of the technological solutions to be developed will be key, so that they are perceived as safe and environmentally efficient.

Will we realistically meet sustainable development goals within the next decade through technological and scientific advancements in the aviation sector?

The impact of Covid-19 on the world’s aviation sector is unprecedented in its severity, and the aviation industry has never faced this situation before on such a scale. Each day another fleet is grounded, and there are many layoffs and order deferrals or cancellations. In the coming months, this will severely impact the manufacturing industry along with the maintenance, repair and overhaul industries.

This could well change the way we travel and affect the aeronautical sector in a manner that we cannot predict at this stage. But commercial aviation has survived many big challenges in the past, has recovered and grown stronger.

Despite this uncertainly about the future, the demand for new technologies in aviation is expected to remain very high – for fuel efficient aircraft and low-noise planes, for alternative fuelling and (as far as Europe is concerned) for finally achieving a Single European Sky.

Today, disruptive game-changers such as electrification, digital technologies and automation are shaping the new era of aviation. Urban air transport, personal 3D mobility and near-silent and emission-free aviation are on our doorstep. At the same time, digital and industrial technologies, (such as artificial intelligence, quantum computing, block chain, multidisciplinary design, digital twin, additive and personalised manufacturing), as well as new energy carriers, will have an important role to play in the aviation of the future.

Will this be enough to enable meeting the Sustainable Development Goals within the next decade? Probably yes, if the European aviation industry is able to adopt a comprehensive environmental strategy. This should include designing and building more fuel-efficient airplanes, improving gate-to-gate operational efficiency for customers, modernising air traffic management systems and developing sustainable aviation fuels.

To conclude, I’d like to offer one final reflection on sustainable aviation fuels (SAF). These are seen as the most viable route to decarbonising aviation in the short term, as they can be incorporated seamlessly into existing aviation architecture. However, with regard to the important role SAF should be playing in decarbonisation, the aviation industry is still far from seeing a widespread use of SAF. Therefore the challenge is not so much the chemical properties of drop-in fuels, but the obstacles to achieving mass market uptake – since, currently, production capacities are far below the aviation sector’s fuel consumption.