We have assumed since we were at school that the shortest distance between two points is a straight line. If we trace out the route between two airports on a map of the world, we will be tempted to think that a straight line drawn between both points marks the shortest route. We, however, have to bear in mind that maps are nothing more than graphical representations of the Earth on a flat surface, including all the deformations this entails. Hence, the shortest route, though it may surprise us, turns out to be a curved line which corresponds to a great-circle arc. The larger the difference in latitude between both points, the more pronounced the curve will be.

Flights over the poles allow almost five hours to be cut on trips from New York to Hong Kong.

This is precisely what some airlines thought in the middle of the 20th century in an effort to reduce connection times on their intercontinental flights. It was SAS (Scandinavian Airlines System) which made the first such passenger flight in 1952 between Long Beach and Copenhagen with a couple of stopovers at Edmonton and Thule airbase in Greenland. The interest it aroused and, above all, the proof it provided of cost and time savings these kinds of flights entailed led to this and other airlines initiating transpolar flights. The first regular flights were also operated by SAS as from 1954 between Los Angeles and Copenhagen.

The great problem which arose for these routes’ commercial development to link Asia with Europe and America were the airspace restrictions imposed by China and the former USSR, especially in the Cold War period. Furthermore, the USSR’s inadequate air traffic control system and the difficulties placed on communicating in English also contributed at the time. Aside from the impossibility of making flights through that area, a direct consequence was that at least two Korean commercial flights were shot down.

The dismantling of the USSR and the appearance of Russia, which was eager to recover its relationship with the world, favoured a rapid reconsideration of the issue of flights over Artic areas.

They officially entered into operation as from 2001 with all this would involve; four transpolar flight routes, which are the ones airlines use today. As opposed to the conventional route, almost five hours can be saved on flights linking New York with Hong Kong, which is desirable for all the parties involved.

Air routes over the poles have their own specific idiosyncrasy. Navigation, solar radiation, the possibility of fuel freezing over, communication capabilities, emergency rules, crew training, onboard equipment and the aircraft are particularly important on these flights.

We have gathered together the most relevant information on transpolar air routes, along with some curious facts that will surely surprise you in this infographic. Enjoy it. 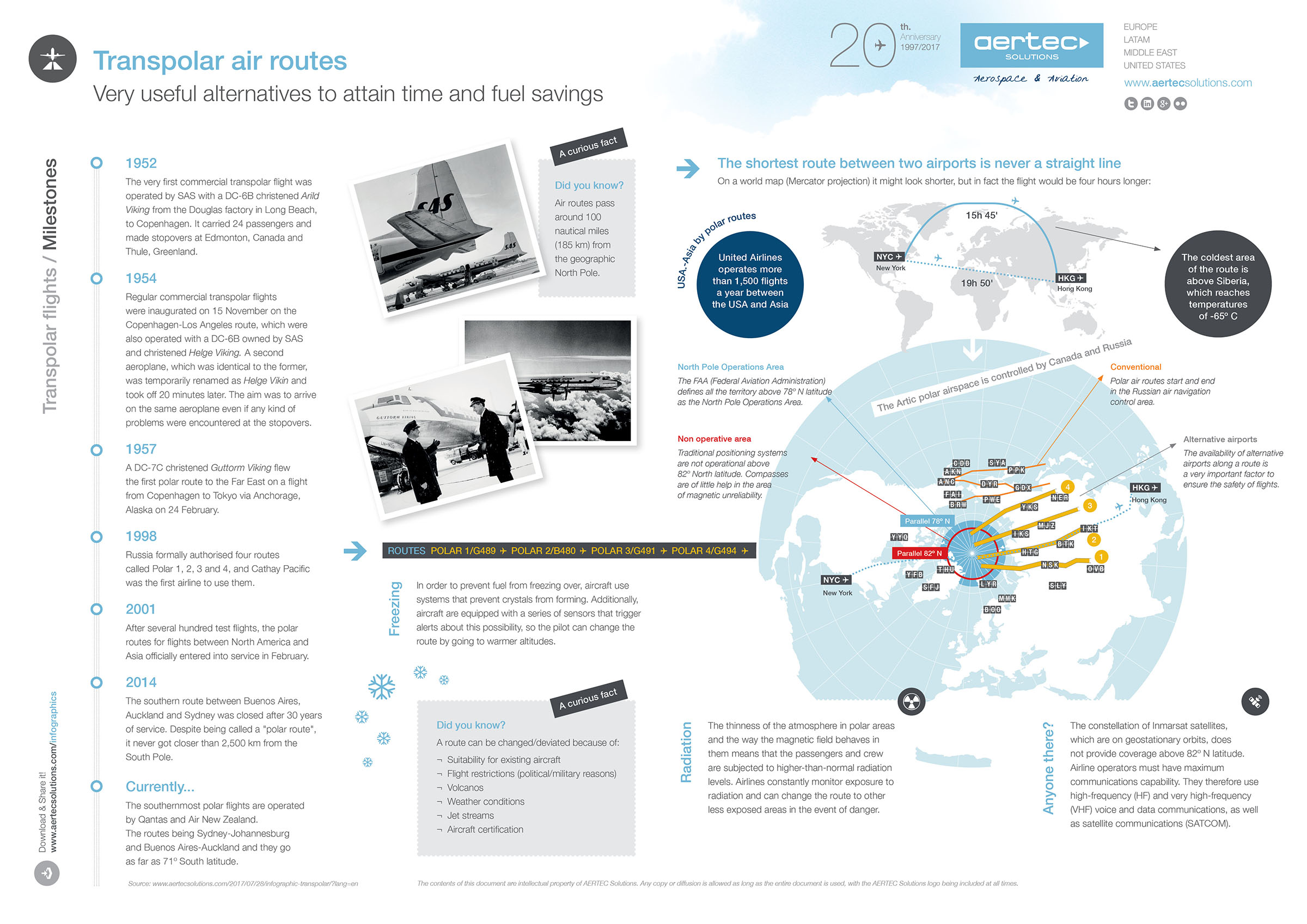