It is hard to imagine that an aircraft model which is hardly known by the public and not used to transport passengers can turn out to be strategic for an aircraft manufacturer. But this is precisely the case of the A300-600ST – also known as the Beluga – for Airbus.

The great European aircraft manufacturer has markedly decentralised production lines. It depends on parts and sections manufactured in a dozen countries to develop its different models. All the components converge on each of the assembly plants, which are mainly located in Toulouse, Hamburg and Seville.

The Airbus Beluga has played a crucial role in the company’s growth since the mid-1990s.

The logistics needed to do so are immense, especially concerning the shipping of large aircraft sections. Though these were initially shipped by road, rail or sea, the need for air transport soon became evident in order to optimise the availability of components at final assembly lines and speed up the pace of production.

Airbus initially made use of an aircraft known as the Super Guppy. This was an aeroplane built around the fuselage of a C97J Turbo Stratocruiser, a military version of the Boeing 377, through a series of modifications that allowed its payload to be ostensibly increased. Once Airbus took over this aircraft’s production rights, which had been further evolved (the SGT version or Super Guppy Turbine), it built another two units and operated them until the end of the past century.

Nonetheless, Airbus deemed it was necessary to design its own cargo aircraft in the 1990s. It needed to improve the aircraft’s performance to meet the growing pace of aircraft production while at the same time reduce its high maintenance costs.

In August 1991, two of the Airbus Group’s partners, the French company Aérospatiale and the German company Deutsche Aerospace AG (DASA), set up SATIC (Super Airbus Transport International) based in Toulouse to develop a new cargo aircraft that would meet the group’s logistical needs. This resulted in the Beluga.

The Beluga is a specialised aircraft to transport oversized cargo which was developed on the basis of the Airbus A300-600R. The experience gained in preceding years was crucial for the design of a tailor-made aeroplane capable of fulfilling the performance specifications required by Airbus. The cockpit was shifted downwards, a “hump” was placed on the top, access pontoons were built onto the hold which optimised the cargo’s manoeuvrability, along with other adaptations. The result was the A300-600ST (ST for Super-Transport).

The Airbus Beluga has played a crucial role in the company’s growth since the mid-1990s. This model’s five operational units transport large parts, components and sections of the different Airbus models among eleven different locations on more than 60 flights a week. It also provides service to third parties for cargos which cannot be transported by other aeroplanes due to their exceptional size.

Today, however, Airbus’s logistical needs require an even larger Beluga that is better adapted to new models and their growing demand. That is why production has already begun of the Airbus Beluga XL, a new aircraft which in this case is based on the A330-200, which will be larger, more powerful and have a greater range. It is slated to enter into service in 2019 and will coexist with the current Beluga until 2025, when the five new XL units are expected to be operational.

This infographic shows you some interesting data on the Airbus Beluga, including both the current model and the upcoming XL, along with some other curious facts. We hope you enjoy it, and please feel free to share it. 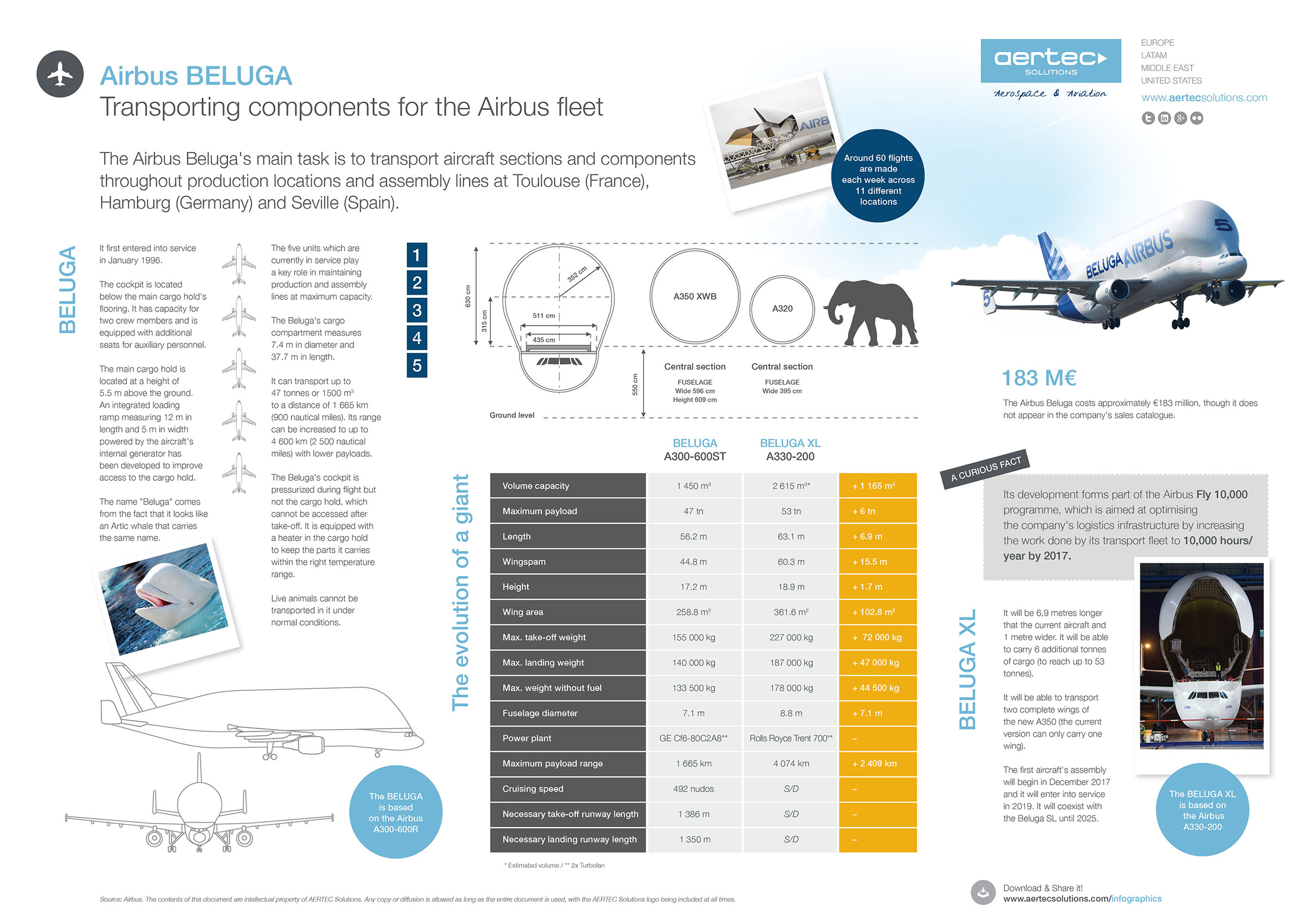