HAPS Zephyr, an aeroplane or a satellite?

Their appearance reminds us of an aeroplane, but they play the role of a satellite. They are neither one nor the other, but seem to combine the advantages of both.

HAPS (High Altitude Pseudo-Satellite) are unmanned aerial systems which carry out their missions at an altitude of around 65,000 feet (about 20,000 metres). They also have a highly interesting feature; namely their ability to fly non-stop during several weeks and even permanently under optimal conditions.

HAPS have raised a dilemma for some governments and companies. Is not an aeroplane, neither is it a satellite, but it behaves like both.

This type of aircraft is ideal to conduct so-called “local persistent” missions that focus on a specific area of interest (which may have a surface area of several hundred kilometres) and provide non-stop services. Depending on the systems they carry, they can act like spy satellites, communications centres and conduct environmental surveillance missions or perform dozens of other tasks. The only constraint they have is the aircraft’s payload, which is the factor that conditions the weight of the equipment which can be carried.

One of the best known advanced HAPS is being developed by Airbus Defence & Space and is known as the Zephyr. This project was originally designed by the British company QinetiQ (set up in 2001 from the UK Defence Evaluation and Research Agency), though Airbus took over the programme in 2013. 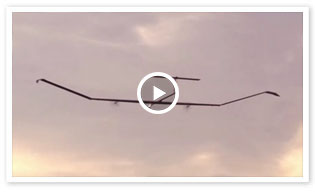 Airbus flew the Zephyr for the first time in 2014 at an altitude of almost 19,000 metres above the Dubai desert during six consecutive daytime/nighttime cycles. Many other flights followed, in which the aircraft was subjected to differing altitude, weather and sunlight hour conditions. That latter are particularly significant, seeing as the Zephyr is precisely powered by the sun. Its wings are covered by photovoltaic solar cells which allow the batteries to be charged and the engines to operate. The tests conducted in winter conditions with very short days were likewise a success. The aircraft was able to stay aloft for up to eleven consecutive days in highly unfavourable environments.

The appeal of an unmanned aerial system is evident, given that it is capable of flying almost non-stop at the very edge of the earth’s atmosphere. On the one hand, it is undoubtedly attractive to security forces because it can provide them with an observation post at that altitude that would allow them to conduct continuous surveillance and thereby gather critical intelligence.

Furthermore, there are several fields where these aircraft are especially interesting, including: environmental surveillance, precision agriculture, security and telecommunications. The possibility of offering Internet to remote areas is precisely one of the main reasons why companies are developing this kind of aircraft.

The United Kingdom government was the first to have acquired these systems from Airbus. After having purchased the first unit two years ago, another order for two additional units at an estimated cost of around €14 million has in principle been confirmed. This represents a significant saving on the cost of using satellites for the same tasks.

HAPS have raised a dilemma for some governments and companies. Choosing to use an aerial system that allows activities to be performed which up to now were done by satellites, but at a much lower cost, is obviously attractive.

Nonetheless, the sectors dedicated to manufacturing and launching satellites have not stood still and their costs are nowhere near what they were a decade ago. They are not even close. The entry into the market of private companies which compete directly with large manufacturers has changed the market’s rules. There are presently several hundred companies and research centres that build micro-satellites in which conventional components are used and whose functionality is in keeping with the requirements of potential customers. The CubeSat concept is a clear exponent of this trend.

Similarly, not only large space agencies are capable of putting satellites into orbit today. A fair number of companies are creating low-cost launch systems. Neither can we forget the wager placed by large companies (like Blue Origin or Space X) on the design of rocket launcher recovery systems.

As a matter of fact, we are facing a radically different scenario from the one which reigned just a few years ago. The possibilities are many and highly varied. To top it all off, prices are very competitive.

The Zephyr programme comes into play in this context. Is not an aeroplane, neither is it a satellite, but it behaves like both. Its price is also cheaper than both. It is aimed at operating at a budget of less than €900 per flight hour.

It is an option that is worth taking into account, and we will surely hear much more about it in the coming years.