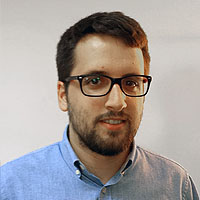 Western countries were faced with the need to reduce their energy dependence on oil due to the oil crises of the 1970s. The term energy efficiency was coined within this context. The measures taken at that time were later relaxed when oil prices fell in the 1980s. However, governments and society were already aware of the need to reduce their dependence on fossil fuels and maximise energy efficiency in all systems that needed oil and its derivatives to operate.

The aeronautical industry has been at the forefront of technological innovation in the 20th century, turning air transport into a mass phenomenon undergoing constant growth. Nevertheless, that technological improvement has not always been translated into energy efficiency improvements, as can be seen in the introduction of the first jet-propelled aircraft in the 1950s. Despite having better in-flight performance, these aircraft consumed more fuel than propeller-driven aircraft.

Over the last 50 years, the energy efficiency of jet engines has improved by 70%. This, along with other technological improvements (aircraft systems, air traffic control and improvements in runway operations), has contributed to a notable improvement in fuel consumption.

In its publication entitled ICAO Environmental Report 2013, ICAO confirms that this trend in energy efficiency improvements is set to continue over the coming decades. The organisation forecasts that a 35% improvement in jet aircraft fuel consumption will be achieved by 2030 when compared to their average consumption in 2000.

Airports are not unconnected with the fuel consumption improvements seen in aircraft. The so-called fuel farms are the airport facilities which best reflect these trends.

Fuel farms are one of an airport’s most critical facilities. They are designed to withstand several days of demand without receiving external fuel supplies. A failure at these sites could ground aircraft and consequently lead to damages to passengers.

If the trends forecast by ICAO regarding the improvements in jet engines are confirmed, fuel farms at airports will undergo significant changes in demand, even with large rises in passenger traffic.

For example, let’s analyse a fictitious airport handling 15 million passengers a year in 2015, which is slated to double passenger traffic demand in the next 25 years. It would thus reach a passenger traffic figure of 30 million in 2040. 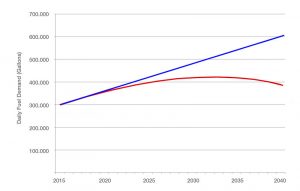 If the energy efficiency of aircraft does not improve over those 25 years, fuel consumption at the airport will double as traffic is doubled. In other words, it would rise from 150,000 gallons in 2015 to 300,000 gallons in 2040 (blue line in the graph). This would force the airport to double the capacity of the fuel farm and all its facilities.

However, thanks to the improvements forecast in aircraft consumption, a situation like the one shown by the red line could come about: greater aircraft energy efficiency could make the demand for fuel at airports fall significantly, even with large rises in passenger traffic.

Following one trend or the other will necessarily have an impact on many of the economic and management aspects affecting airports (design, planning, storage infrastructure construction and maintenance, as well as the sizing of associated safety and operational measures). Knowing for certain what fuel consumption will be like in a few years’ time, or at least having a good approximation thereof, and consequently of the infrastructures needed is a great help to the future accounts of any airport authority.

For the moment, the most common and reasonable solution is to locate fuel farms in large areas of the airport which have the capacity for expansion in order to progressively adapt the facilities, should it be necessary, to the demand for fuel.