One of the most striking features of aeronautics today is the trend towards a more sustainable industry. It affects both industrial processes and end products, namely aircraft. Any industrial areas where innovations geared at reducing their impact can be applied are systematically optimised in this regard. Furthermore, we are simultaneously witnessing a race to achieve greater in-flight efficiency in aeroplanes by reducing their impact while increasing their performance at the same time.

The Solar Impulse and the E-Fan are two initiatives that have once more demonstrated that the aeronautical industry still has many things to teach us about sustainability.

Two aeronautical initiatives have greatly attracted the world’s attention in recent weeks. From their different perspectives, they reflect a long sought-after goal: minimising and even doing away with the use of fossil fuels.

At the beginning of July, Solar Impulse 2 flew non-stop between Nagoya, Japan and Hawaii, United States. The 7,200 kilometre trip lasted four days and 22 hours, beating several records along the way. This aircraft’s peculiarity resides in the fact that all the energy it uses comes from the 17,248 photovoltaic cells arranged throughout its structure. 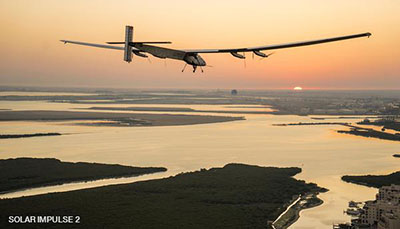 It is a true aeronautical feat which, nonetheless, has not been free from difficulties and constraints. In fact, adverse weather conditions had a decisive influence on delaying the flight for several weeks. Additionally, the batteries’ special thermal insulation (the aeroplane flew at an altitude of 8,635 metres at extremely low temperatures) and the energy generated by their operation caused irreparable damage to the batteries. There is no doubt, however, that it constituted an enormous step forward in achieving fossil fuel alternatives. Thanks to this epic journey of travelling around the world without using fossil fuels, this project is based on a motto that is having a huge impact on society: “Future is clean“.

The Solar Impulse project was conceived in Switzerland and is sponsored by more than a hundred institutional and business partners, including Solvay, Omega, Schlinder and ABB.

Crossing the English Channel with a small innovative electric aeroplane called the E-Fan was another aeronautical feat which was also achieved in July 2015. In this case, the energy needed for the flight came of a series of lithium ion polymer batteries mounted on the wings’ inner section. The thrust was provided by two variable pitch fans that allowed it to reach a cruising speed of around 160 km/h. 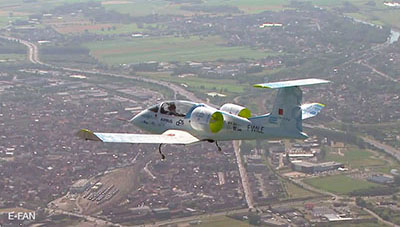 After more than 100 test and exhibition flights, this aircraft flew over the English Channel between the cities of Lydd in the United Kingdom and Calais in France on 10 July. The E-Fan completed the 74 kilometre trip in 37 minutes, flying at an average altitude of 1,000 metres (3,500 feet). A Blériot XI, piloted by its designer Louis Blériot, was the first aeroplane to fly over the English Channel (although on that occasion in the opposite direction) also in July, but 106 years before.

The E-Fan was developed by the European Airbus Group consortium, which is continuing to develop this aircraft in order to provide it with more power and make it lighter. Work is already being done on new two and four-passenger versions at the same time. The manufacturer aims to initiate its commercialisation in 2016, which will undoubtedly be another milestone on the path to a more sustainable aeronautics.

The Solar Impulse and the E-Fan are two initiatives that have once more demonstrated that the aeronautical industry still has many things to teach us about sustainability. They are two exciting projects which have gone a step further.

Check out for more information: Solar Impulse 2 and E-Fan

That we have reached this point, however, does not mean that we have arrived at our destination. There is still a long way to go. However, there is no doubt that we are heading in the right direction. Are you of the same opinion?