Reducing the environmental impact of aviation has been a constant priority, especially since the start of this century, which brought with it an increasingly prominent concern about climate change and its impacts. Billions of euros have been invested in research and development, which has subsequently led to measures and practices that have made significant progress in reducing the overall environmental impact of the sector.

The aviation industry in general and airports in particular are united in their fight against climate change, and have achieved some very positive results after more than ten years of hard work.

However, the steady increase in air transport worldwide remains an underlying problem. The rate of growth means that the measures being taken by the sector are insufficient, and at the moment the overall balance is not as positive as it could be. For some, the key is to properly weigh the benefits of air connectivity against the environmental impact it leads to; however, this is not enough.

Aviation produces about 2% of all human-related CO2 emissions in the world. Nevertheless, many people consider aviation to be a disproportionately large contributor to climate change. The truth is that the entire air transport sector, from aircraft manufacturers to airlines, is aware of the problem and is working on several fronts to minimise its impact on the environment.

This work is being done through a combination of new technologies, improvements in operational efficiency, new production systems, cleaner fuels, new aircraft built with lighter materials, and waste reduction – in short, an immersive process of continuous improvement aimed at moving towards “decarbonised” aviation.

There’s no other way. This is a global problem and the entire industry, together with governments and regulators, has an obligation to come together to meet this challenge, without this having to damage the economy, people, employment or any other positive development arising from aviation as a whole. We should all be aware that we all have to do our bit, including manufacturers, operators, airports, regulators, governments and even the passengers themselves.

Among the various different initiatives, we should highlight the scheme by ACI Europe (later taken up by ACI World) for implementing a sustainability strategy for airports. Its objective is to address the environmental, social and economic problems of airport environments by granting them different levels of accreditation according to the steps taken in their commitment to achieving net zero carbon emissions.

But there are also other major projects being implemented in the sector, such as the Single European Sky project (SESAR programme), where a new optimised structure for the European air network will increase capacity, reduce congestion, increase safety, optimise times and reduce emissions. This reorganisation will be accompanied by unified airspace management and unified use of technologies, which will be geared towards the new horizon of automation. It is estimated that this initiative will reduce CO2 emissions by 8 million tonnes per year.

No matter how much we do to increase the sustainability of the aviation sector worldwide, we can always do more; however, we are currently moving in the right direction and, more importantly, every day we are adding new challenges and making more commitments in the fight against climate change.

We have created an infographic on this subject that explains some of the initiatives being carried out in airports around the world to reduce their carbon footprint and to increase sustainability in every one of their activities. We invite you to analyse and comment on the infographic, as every point of view has something to add to this global endeavour. 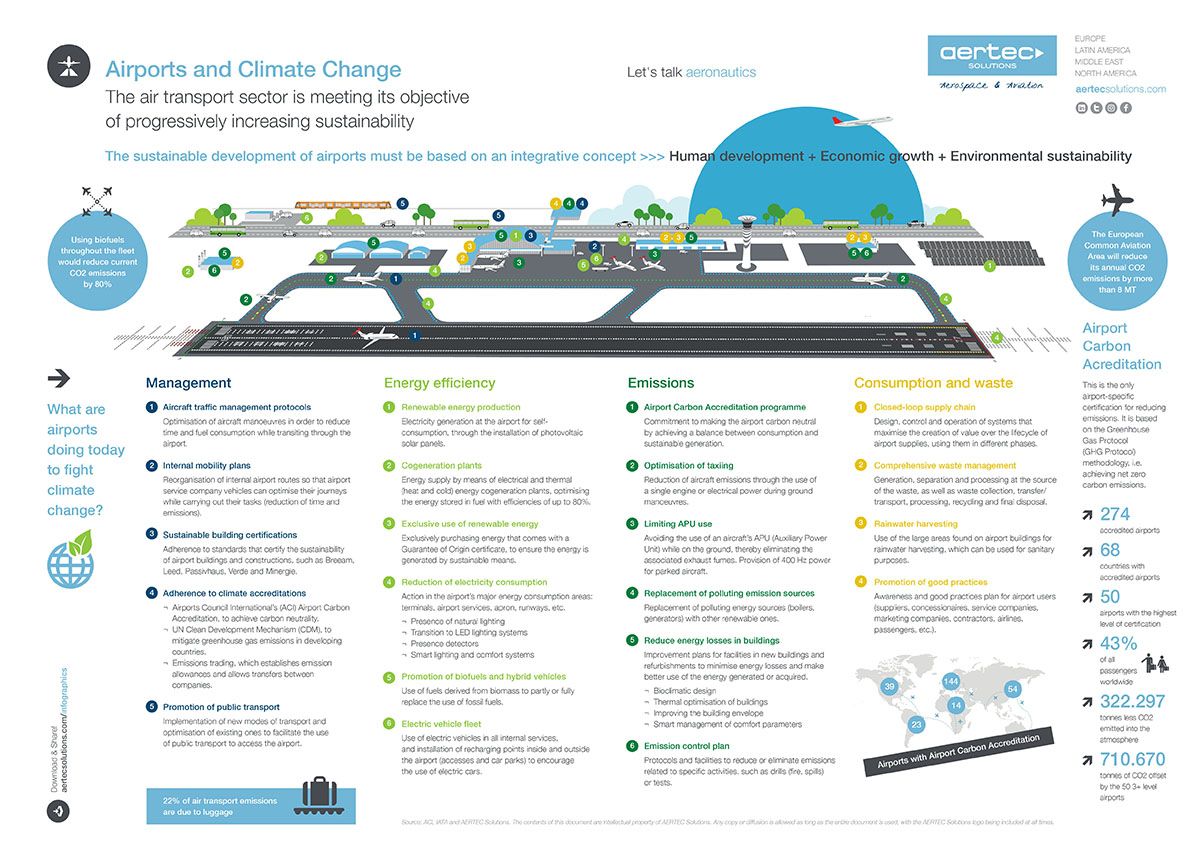