The airport of the future: Passive systems vs active systems

Human activity – our daily routine behaviour – is responsible for releasing billions of tons of CO2 into the atmosphere each year. We emit greenhouse gases at a speed never seen before and worst of all: there is no sign of slowing down. As a result, over the last decade, we have reached the highest global mean temperatures in recorded history.

Airports are huge technological monsters and one of the main goals should be to identify and significantly change the rules that govern them.

It is true that climate-related disasters and extreme weather events have always existed. However, these are becoming increasingly frequent and intense. As global temperatures increase, there are more heat waves, droughts, typhoons and hurricanes, causing massive destruction around the world.

The vast majority of experts agree that it is essential to reduce greenhouse gas emissions. Otherwise, temperatures could increase by up to three degrees Celsius on average by the end of the century. In all probability, this scenario will be catastrophic, causing irreversible damage to our ecosystems. Our way of life, our routine behaviour, will definitely be affected. We will not live to see this, but the lives of our grandchildren – our children’s children – will be worse than ours.

In this context, there are numerous studies that point to the construction sector as one of the parties most responsible for degrading our natural environment. According to one study, construction and daily use of buildings consume around 50% of natural resources, 40% of energy produced and 16% of the water on our planet. Likewise, this human activity produces almost 30% of greenhouse gas emissions – more than transportation or industry.[1]

If the entire life cycle of a building is taken into account, these percentages are even higher. The previously cited LCA determines the potential environmental impacts of each process involved – material and energetic – during the useful life of a building from the time it is conceived until it is demolished or re-used. This data shows the enormous responsibility that our professional practice (engineering and architecture) has on the environmental crisis we are experiencing today.

The following is an oversimplification, but in order to raise awareness of this impact, historically there have been two clear trends:[2]

The first, which could be called low-tech, based on the “passive” form of buildings, promotes the use of ecological materials, self-construction and the community nature of buildings, mainly residential and small facilities. Lucien Kroll, Sverre Fehn (the building belongs to its place)[3] and Paolo Soleri were pioneering architects in this way of thinking.

The other trend, led for decades by great figures such as Sir Norman Foster, Renzo Piano and Richard Rogers, is “high-tech” – recently renamed “eco-tech” – the hallmarks of which are large, spectacular steel and glass facilities – at any latitude, quite curiously – that base their ecological approach on the use of technology and control of the facilities.

For some reason, the latter trend, misunderstood for the sake of immediacy, is the one associated with the passenger terminals of today’s airports. The experienced design teams in charge of making this a reality increasingly attempt to domesticate the environment – in search of user comfort – through “additive proposals”, based on this overdose of technology. 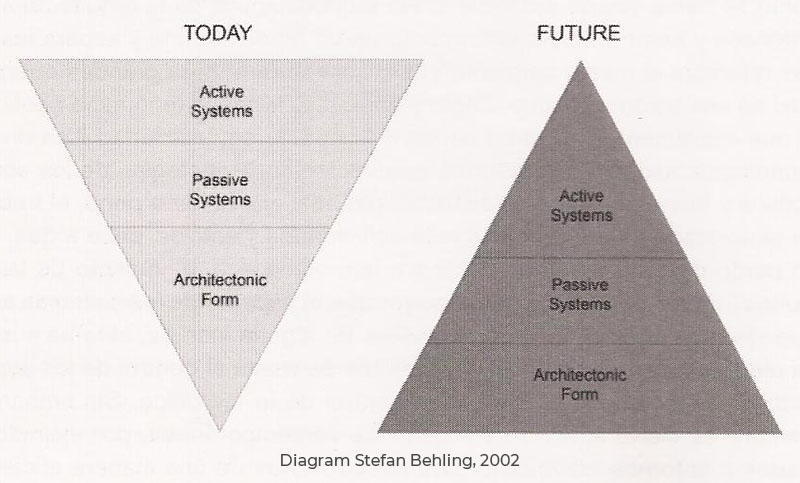 In addition, one must consider that the environment in which passenger terminals are developed (the airport system as a whole is a closed system, almost autistic, with rules for planning and growth – constant by definition – and maintenance) rarely meets “sustainable” criteria, which creates an enormous impact on the rest of the systems and, of course, on the surrounding populations.

One of the main goals of members of teams in charge of thinking about the airport of the future, should be to identify and significantly change the rules that govern these enormous technological monsters. Somehow, we professionals in engineering and architecture involved in the conception and development of an airport should be aware that, for example, a building that processes passengers and baggage should never be considered a modern cathedral.[4] Inverting the “active systems / passive systems / architectonic form” pyramid (see the diagram) is possible even in the iconic control tower.

An example that strictly complies with all these stereotypes is Málaga Airport. Its beginnings could not be more sustainable (recall the landing of Latécoère and Lemaître) but its growth and development are a faithful reflection of how contemporary airports, with rare exceptions, are paradigms of technology and progress, but also represent an untenable development model.

[4] This is a colloquial way of referring to contemporary airports, implying their importance by way of size, mass use and how spectacular they are. TN

Le Corbusier and the Flying Machines. The Plane Indicts Us.

UAS/RPAS: This is not the future, this is Plan INFOCA today